Zan Stark was a prolific photographer who worked in Northern California and the west from the 1920s through the 1950s. He published his work as “real photo post cards,”most of which are readily available. Some of the best scenes of the Springs in the 40s and 50s are from Zan. Zan lived in Boyes Hot Springs and published a newspaper there in the 1950s. Copies of the Valley of the Moon Review are quite rare.

Zan started his career in Mill Valley. The Marin Free Library has a nice collection of his Marin shots. Zan’s entire archive resides at Stanford University Library. Roy Tennant and Mike Acker visited the archive in 2014 in order to choose photos to be digitized for the Sonoma County Library. Stay tuned for the announcement that these have been published on their website. 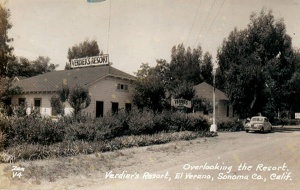