Thanks to the Depot Park Museum. 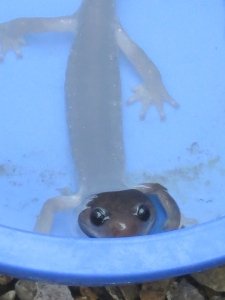 Newts need rain and so do we.

“A starting point, for artists or for anyone else, might be simply learning to look around where you live now… “

Lucy R. Lippard, The Lure of the Local

The history of Sonoma is well known, well studied, written about, and considered to be central to that of California. The history of the Springs, if it is every thought about at all, is not regarded as significant. It was not always so. Although the two areas were contained in two separate Mexican land grants (the Pueblo de Sonoma and Agua Caliente Rancho), Europeans of the early and mid 19th century moved freely between them. General Vallejo himself had interests in the Agua Caliente Rancho. Thaddeus Leavenworth, a prominent member of Stevenson’s Regiment of the Mexican War, was a very early land owner and developer. (Leavenworth sold land to Henry Boyes, on which was established Agua Rica Springs, the precursor to Boyes Hot Springs.)

In the decades after the Bear Flag Revolt, the history of Sonoma became a little romanticized*, and then enshrined in the study of every Californian 4th grader*. The Springs became the pleasure grounds, still more prosperous than the Town, but “outside.” The decline of the resorts after WWII finished off any notions of historical interest.

The Springs Museum hopes to aid in the revival of historical interest in the area. We also aim to suggest that history is all around us and happening all the time. We encourage people to see themselves as part of it, and collectors of it. To that end, the Art and Community of our title are important.

*As an antidote to the romantic, see The Bear Flag Museum: http://www.bearflagmuseum.org/Elizabeth%20Martinez%20Article%20RAZA%20Protest%20A%20Day%20of%20Lies%20and%20Hate.html