Update: please also see https://springsmuseum.org/2018/11/07/the-woodleaf-store-big-three/ for the post about the Woodleaf Store.

Film magnates, fatal accidents and paved (!) highways share space with the beginning of Marion Greene’s career as postmaster.  (Stay tuned for the story about the film magnates.) And, yes, they called it the “Springs” in 1923.

Marion Greene was a businesswomen of Boyes Hot Springs in the mid-twentieth century.  Many women were prominent in business around this time. Mary  Fazio of Mary’s Pizza Shack, Pine Wagner, the pharmacist,  and Jerry Casson were her contemporaries. Emma Fetters was a few years earlier, Juanita Musson a bit later. In 1947 she became a founding member of the Sonoma Valley business and Professional Women’s club. 75 women attend the first meeting.

In November of 1923, Marion Lovett Greene, proprietor of the Woodleaf Store, was appointed acting post master of the Boyes Hot Springs post office and was waiting to take the exam to qualify as the permanent post master.  There as quite a bit of competition for the job among local grocers, the Index Tribune noted. ”Postage stamp sales lead to pork-and-bean sales and love letter inquiries increase pickles sales, so naturally the store keepers want to serve Uncle Sam’s patrons, even if the salary of post master itself is not very remunerative.”  She did become the regular post master and stayed in the job until at least 1939.

Her Woodleaf store was in the Kellar building in 1932, we are told. The same year she move “across the street” to the Putnam building, which presumably was the building at the corner of Boyes Blvd and Sonoma highway,  where the Woodleaf Store stayed as it later became the Big Three. In 1938 Ms. Greene was appointed the Greyhound Bus agent for the Springs as well.

Mrs. Greene served as president of the Sonoma County Grocers Association and the state association, and was active in the California Post Masters Association.

She was named Outstanding citizen of the year 1948  by the Sonoma Valley Chamber of Commerce. In 1949, as chair of the Travel and Recreation Committee, she spearheaded the effort to establish the Valley of the Moon Scenic Route along Highway 12. As part of her duties with the Chamber of Commerce, Ms. Greene appeared on Paul Marcucci’s radio show, broadcast from his resort.

Marion Greene built two houses in Boyes Hot Springs in  the 1940s. In 2019 Marion’s grand- daughter came to Boyes Hot Springs to sell the houses that her grandmother built and gave us a tour. The interiors were all Ms. Greene’s design, and quite charming, featuring custom cabinets and many built-ins.

An artifact found in the out-buildings attested to Ms. Greene’s involvement with local development and business.

In 1949 local boosters celebrated the “centennial” of Boyes Hot Springs. This is puzzling since Captain Boyes did not arrive until 1885, however, they were dating from the arrival of T.M. Leavenworth, who bought hundreds of acres in the Rancho Agua Caliente from Vallejo in 1849. See Leavenworth’s House.

The commemorative tie features the image of a mule because that was the mascot of Boyes Springs at the time. Mules live long lives, but it’s doubtful Peskie was still there in 1949.

Index Tribune courtesy of the Sonoma Valley Historical Society. Photographs by author and from author’s collection.

According to the 2005 Historical Resources Compliance Report for the Highway 12 Phase Two Corridor Project of County Redevelopment (whew!) The Ideal Resort was built some time around 1910 by Anton and Helen Schaffer who, in 1919, sold to Joseph and Margaret Weiss.

The Schafer’s and the Weiss’ were Austrian immigrants, like the Weghoffer family and Leixner, who also had businesses in Fetters Hot Springs. {See Liexner }.

A Northwest Pacific Railroad brochure from the 1910s described the resort this way: “At Fetter’s Springs, three minutes’ walk from the Northwestern Pacific Depot, and ten minutes walk to Boyes, Fetters, and Caliente Hot Springs, where there are large swimming tanks….No expense has been spared to make this place a pleasure ground. Large, sanitary and well ventilated rooms, sleeping porches or tents,…Mrs. Weiss has established a reputation for her excellent Hungarian cooking.”

In 1946, Ray and Florence Loper took over, renaming the place the Floray Auto Court. The Lopers sold in 1958 but the name persisted in to the 70s.

The 2005 Report noted that the Ideal Resort was “one of many small, family owned resorts in the Springs district. Small resorts such as this allowed families and people of lesser means to participate in the resort life previously enjoyed by the affluent. They plays an integral part in the historical development of this area. This property is a good representative of the Springs resort era. There are few small, road-side resorts from the early part of the century left in the Springs area, and non retain the degrees of integrity that this resort does.  Therefore, National Register Criterion A and California Register Criterion 1 are met.” In 2005. As with so many historic structures in the Springs, alteration or demolition proceeded before consideration of historic value could be contemplated.

The buildings were rehabbed in the 2010s. They remain, but very highly altered.

In 1924, this ad appeared in the Index Tribune. The assortment of goods for sale gives pause.

Index Tribune courtesy of the Sonoma Valley Historical Society. Photos by or from the collection of the author.

The store at the corner of Highway 12 and Depot Road in Fetters Hot Springs has been important in that community since at least the 1950s. Fetters Food Mart is first mentioned in the Index Tribune in 1952. The owner at that time is not mentioned, but we know that changed in 1956 when Mr. and Mrs. Roger Cleland sold to Mr. and Mrs. Victor Frolich, “formerly of Lodi.”

In February, 1966 the Index Tribune informs “the store is now operated by Mrs. Fena Parise, of Santa Rosa.”

And in June 1967, “George Raby has taken over the former Fena’s Grocery at 17380 Sonoma Hwy., Fetters Springs. To be known as George’s Grocery, the store is on the corner of the road that goes down to Flowery School and is directly opposite Mountain Avenue. Raby formerly operated a grocery store in Boyes Springs and prior to that had one at Hooker Oaks.”

Photographs by author. Yearbook photo from the “You Know you’re From Sonoma When” Facebook page.

This day, sixty one years ago. Eighteen pages in the issue. What happened that day? Things small and large, meaningful and trivial. Presented with just a few comments and notes. 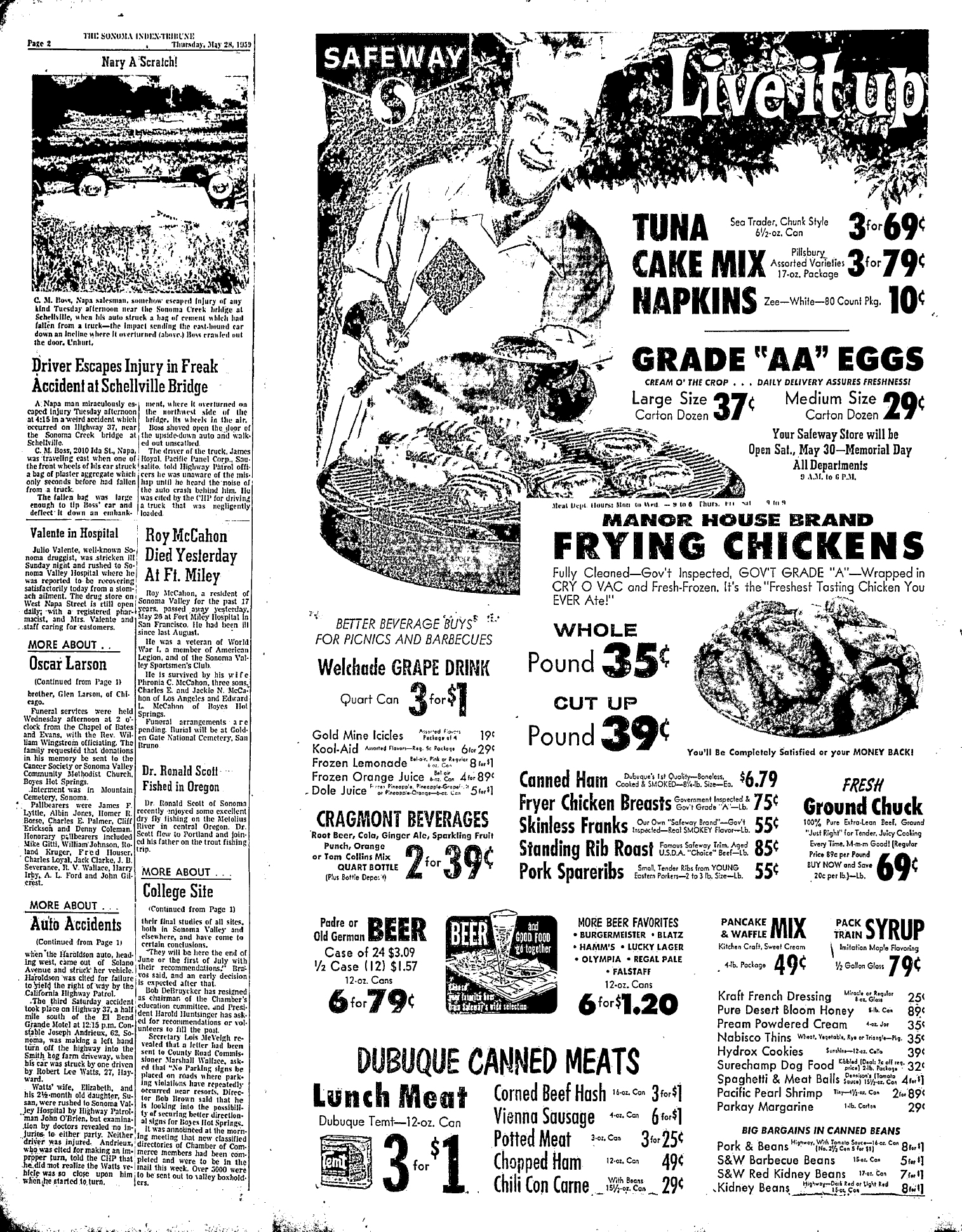 You could get a permit to burn things. 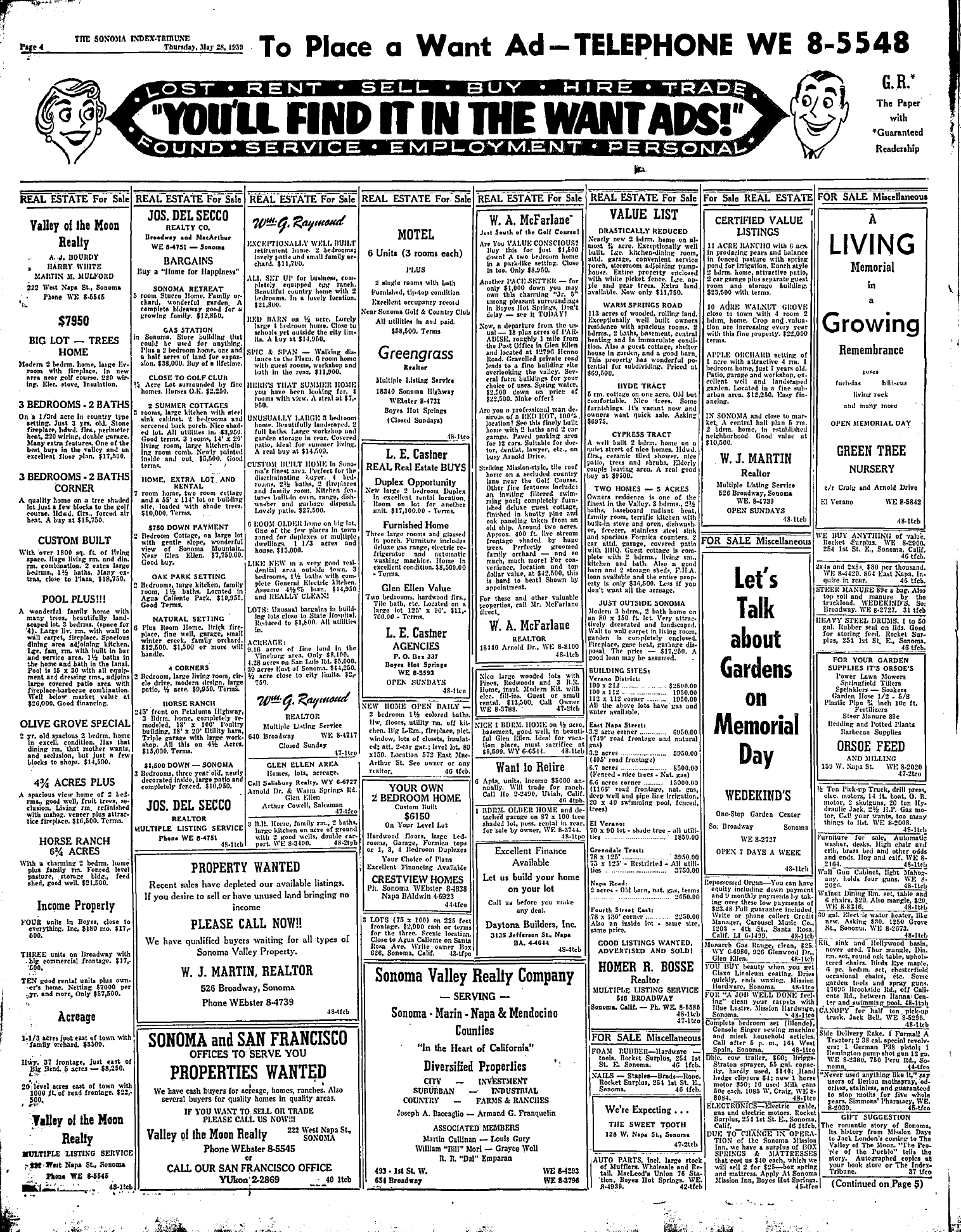 “Never used anything like it,” say users of Berlou mothspray, odorless, stainless, and guaranteed to stop moths for five whole years. Simmons Pharmacy, WE 8-2039. 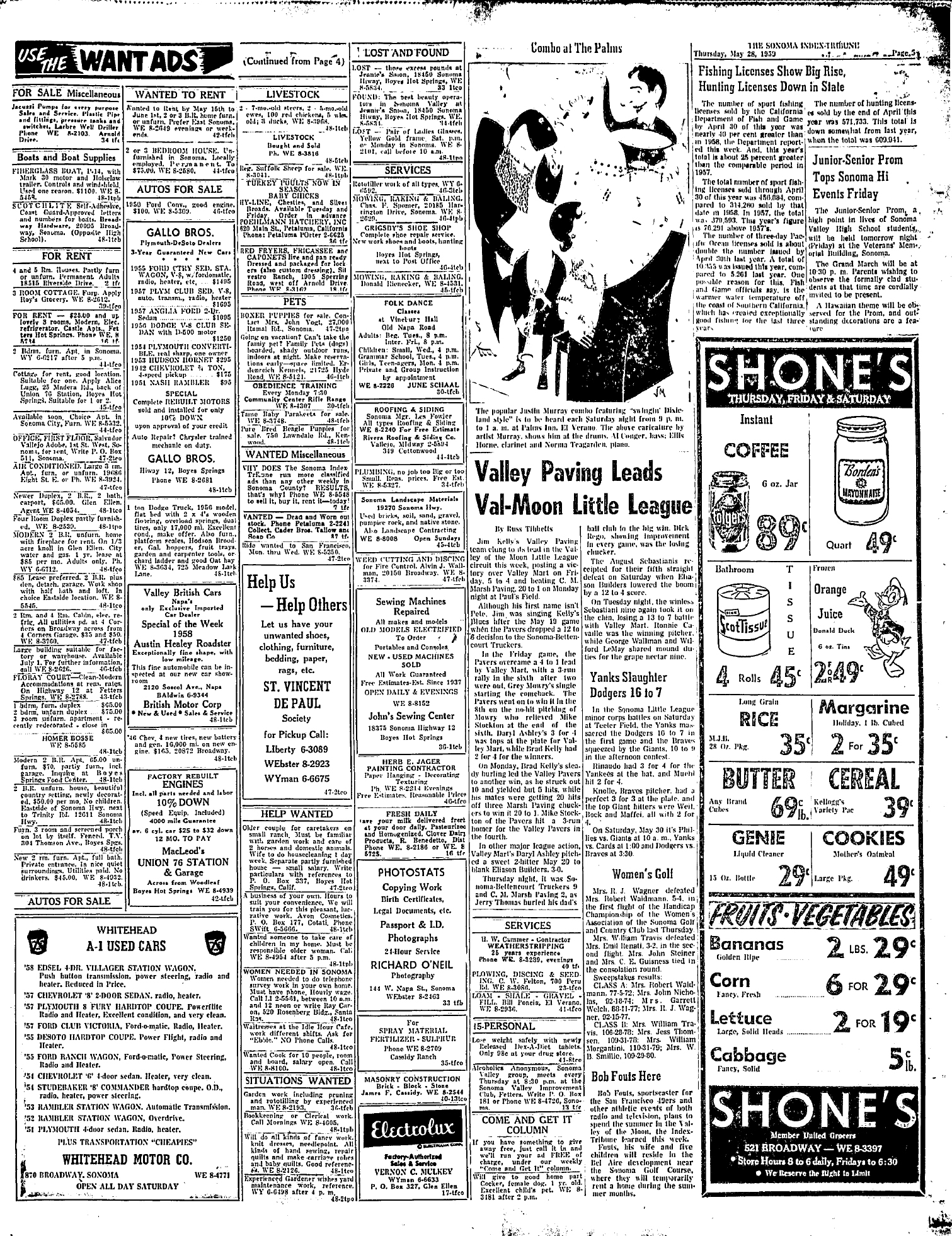 “Bob Fouts, sportscaster for the San Francisco 49ers and other athletic events of both radio and television, plans to spend the summer in the Valley of the Moon, the Index Tribune learned this week. Fouts, his wife and five children will reside in the Bel Aire development near the Sonoma golf Course, where they will temporarily rent a home during the summer months.” Just a few years later, Dan Fouts would be starring at quarterback for the University of Oregon, which is mentioned page 17.

“Help from an outside source in the merchants’ fight to retain the identity of the Boyes Hot Springs Post office came at the meeting when Harry Kay of Santa Rosa, member of the State and County Democratic Central committee pledged his aid.” 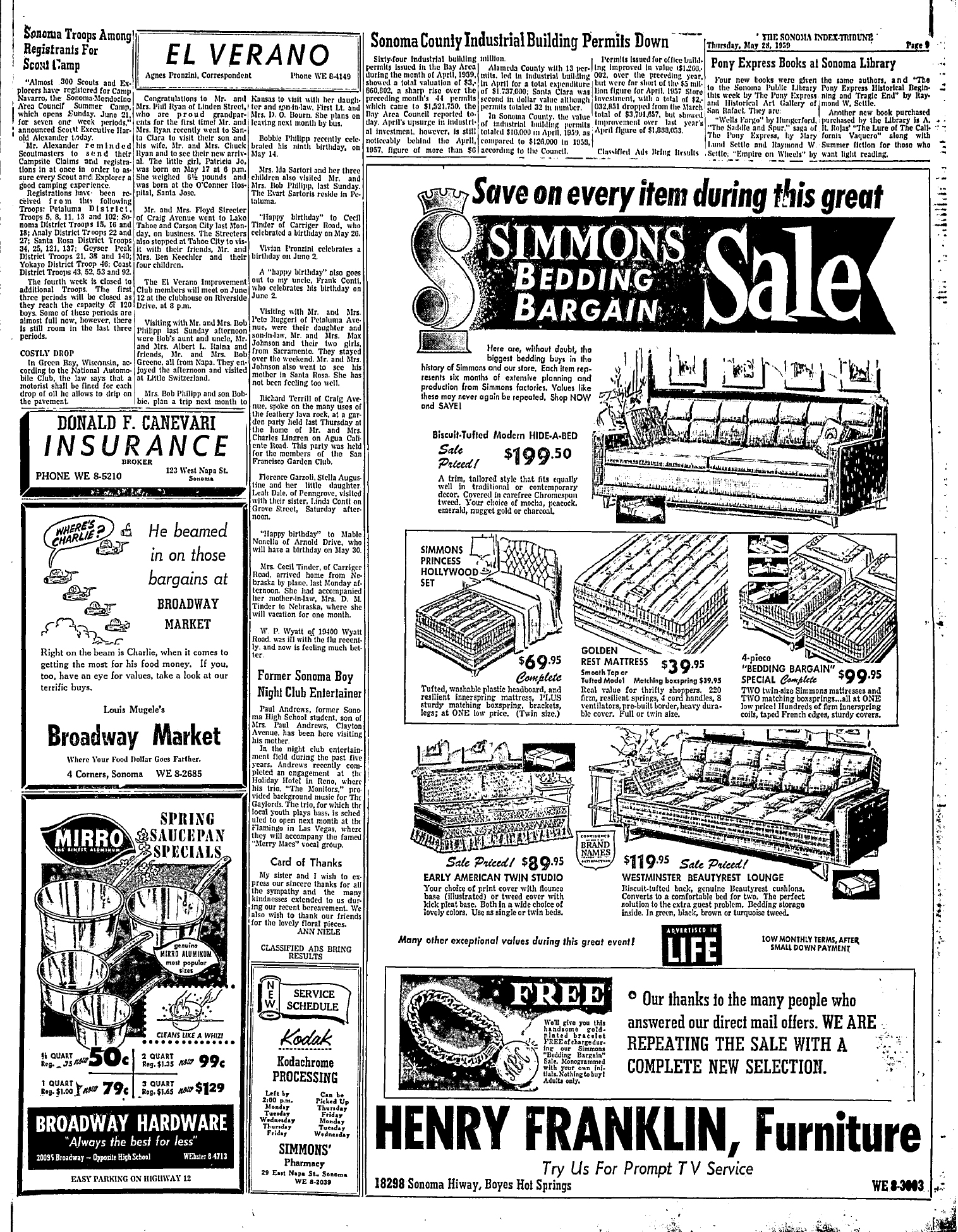 “The El Verano Improvement club members will meet on June 12 at the clubhouse on Riverside Drive.” 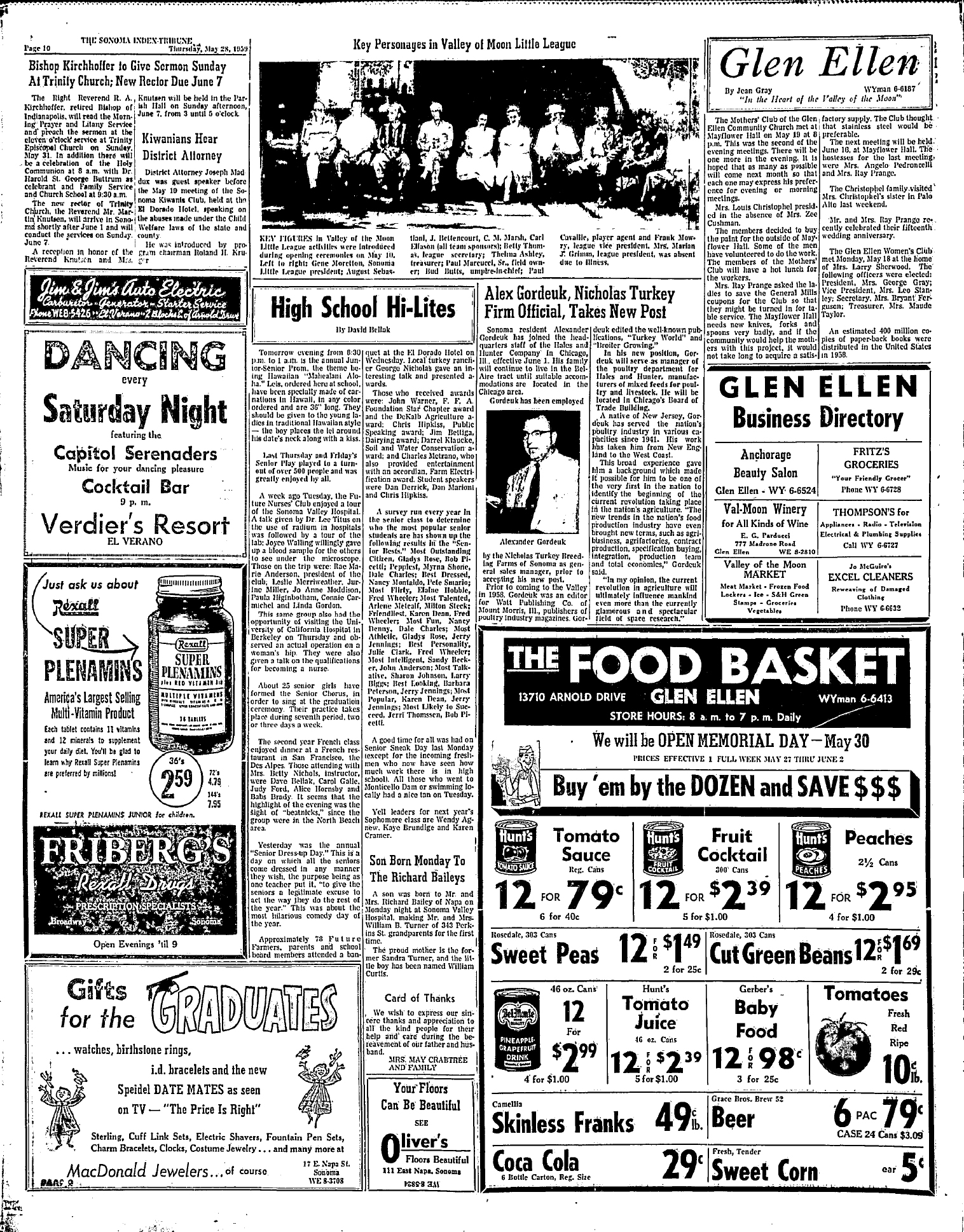 “New Safeway Store to be Discussed By City Planners”, “No Setting Aside of Prunes This Year.” 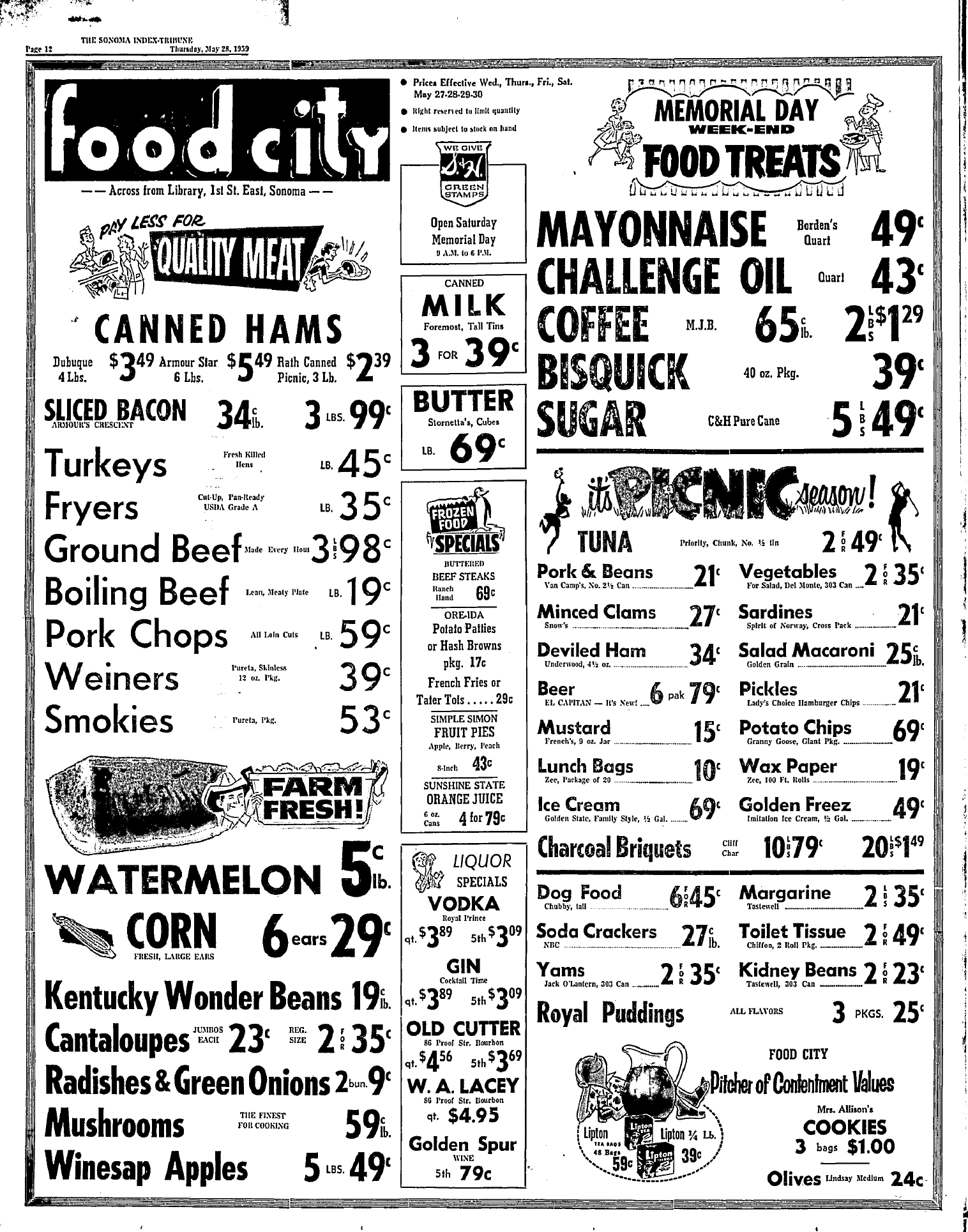 Mario Ciampi is recognized in Life Magazine for design of Sassarini Elementary School. 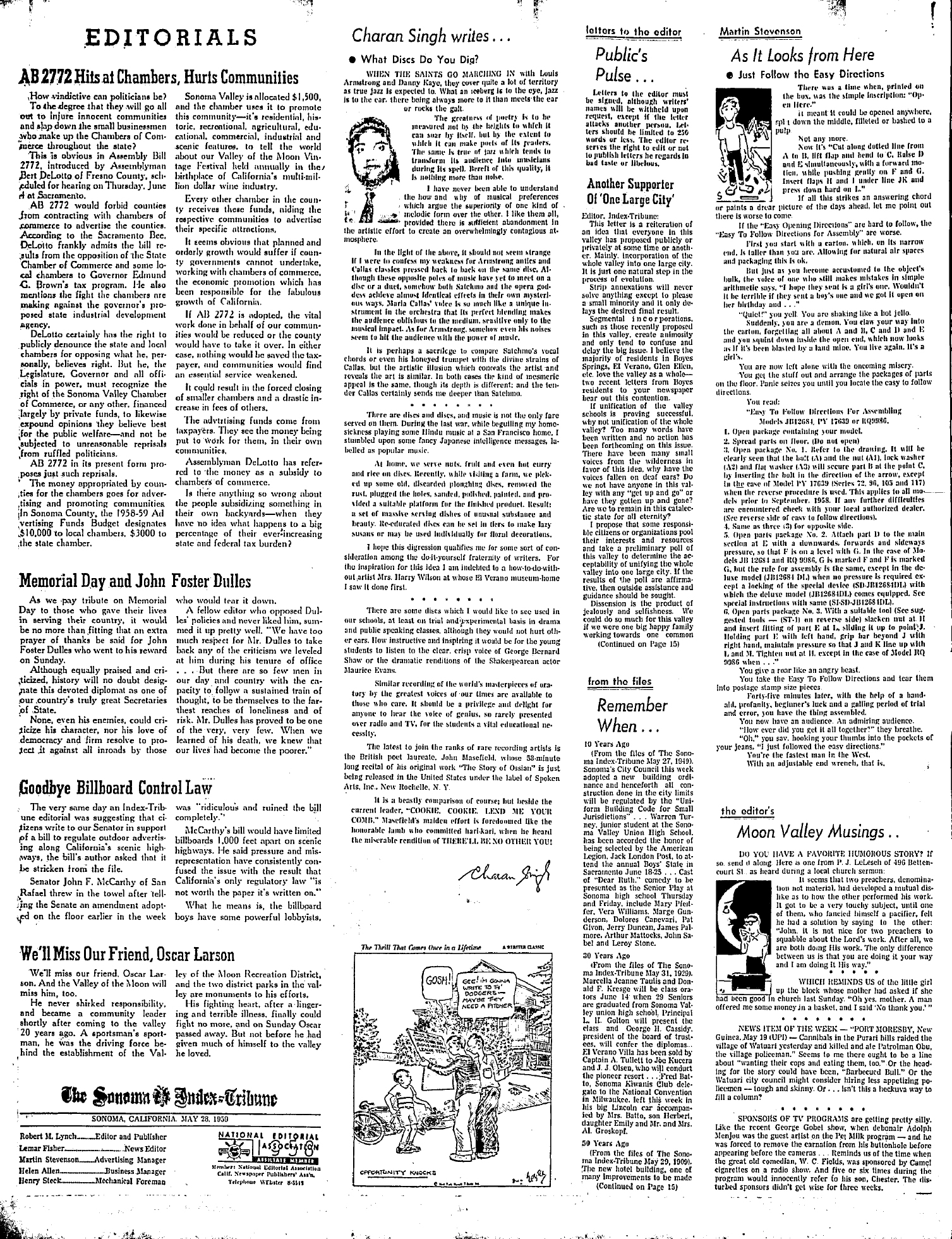 Oscar Larson remembered. A letter to the editor about Valley Unification. 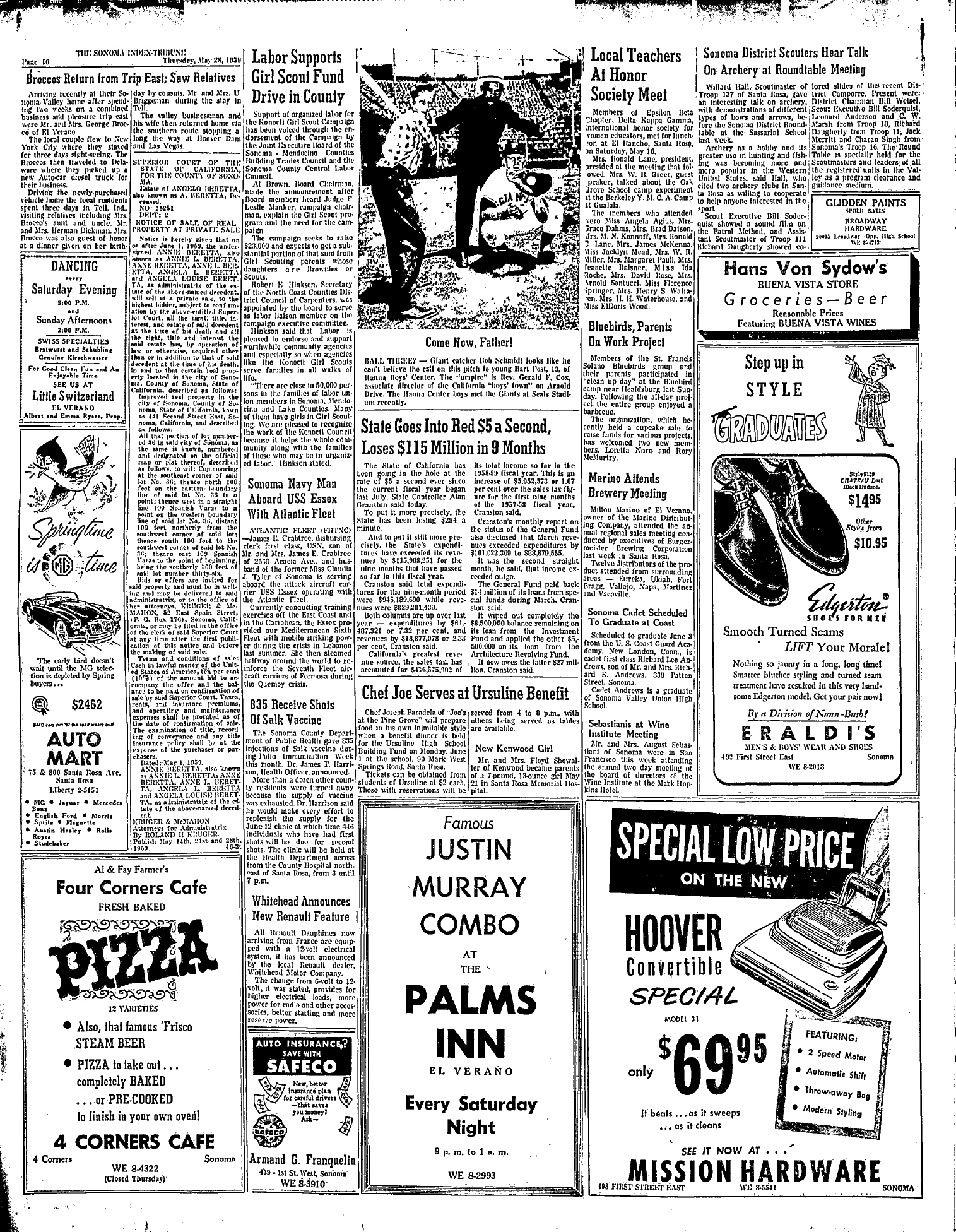 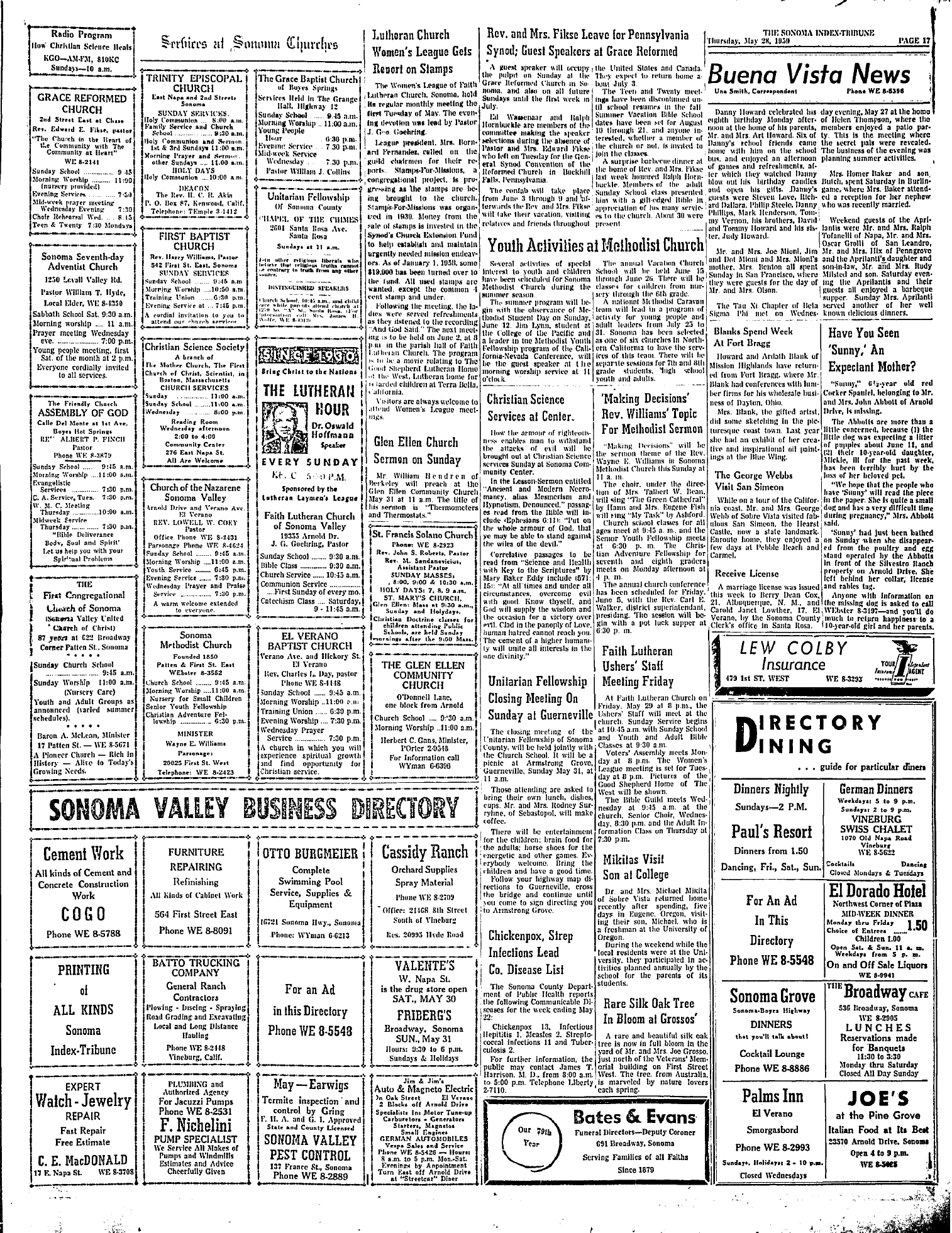 “Dr. and Mrs. Michael Mikita of Sobre Vista returned home recently after spending five days in Eugene, Oregon, visiting their son, Michael who is a freshman at the University of Oregon.”

Just like the houses, the garages of the Springs show an amazing variety. 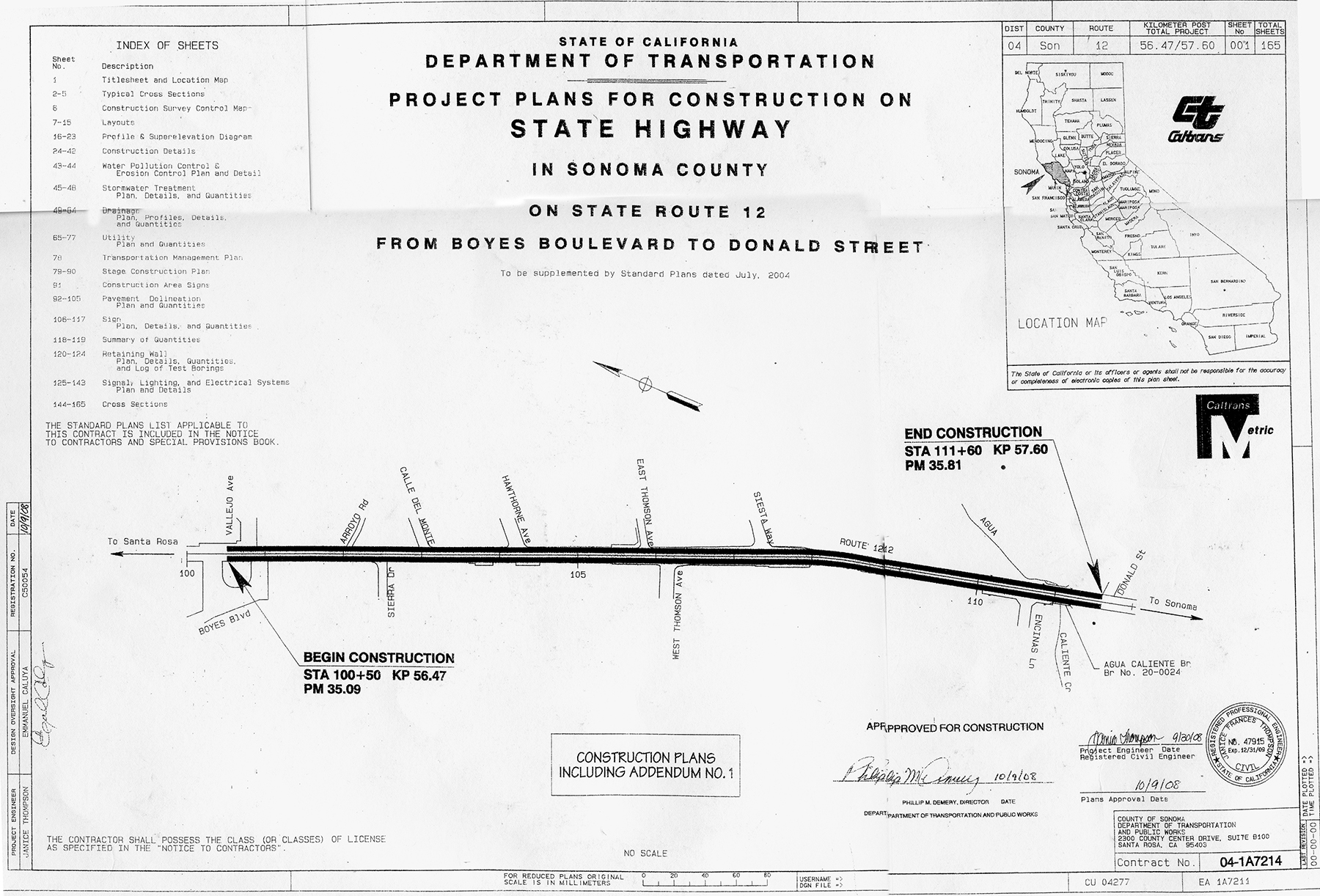 In 2008 final construction drawings for “Phase 2 Stage 1” of the Highway 12 sidewalk project were issued. The drawings are detailed and very specific, as they would be. Everything is spelled out, down to the design of the hardware used to hold up mail boxes, sign details, and the depth of fence posts. 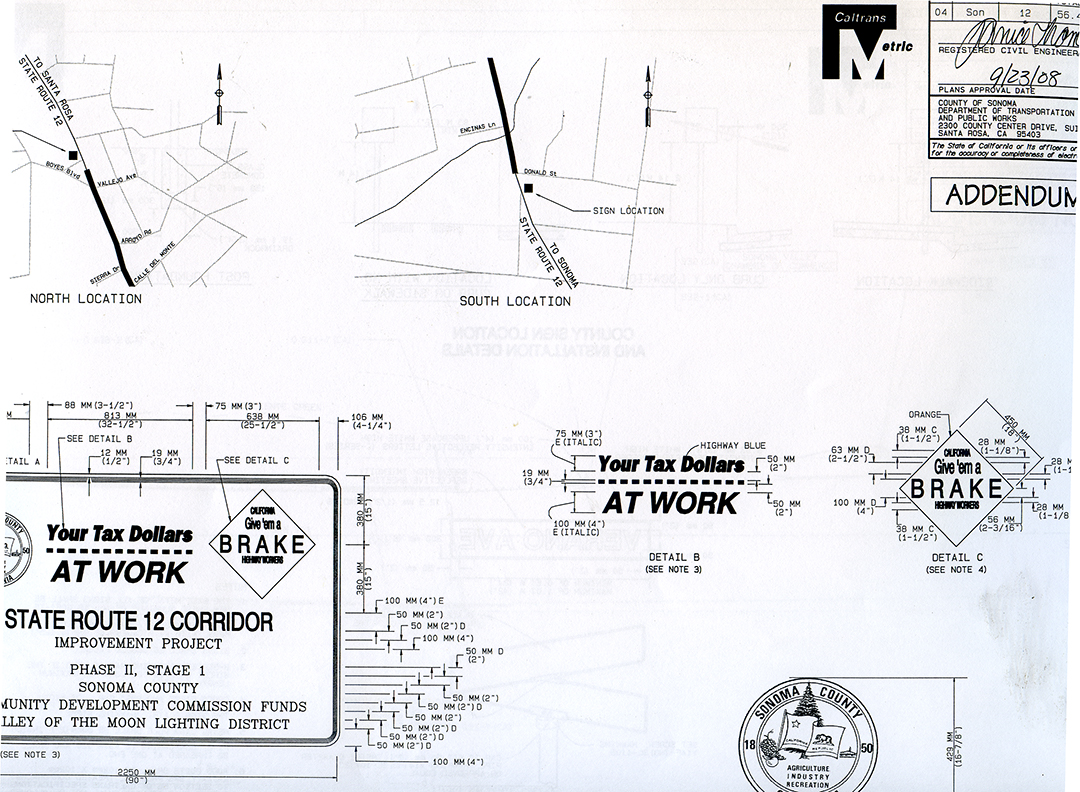 One thing that was not thought about is the space created, or delineated between the edge of the sidewalk and buildings, fences and walls along the highway. Formerly just part of the shoulder of the road, these unpaved spaces became the chaotic province of weeds and trash, unclaimed and untended by anybody.

Layout of the Hawthorne-Thomson stretch

This 300’ strip on the east side of the highway between Hawthorne and Thomson is a good example. 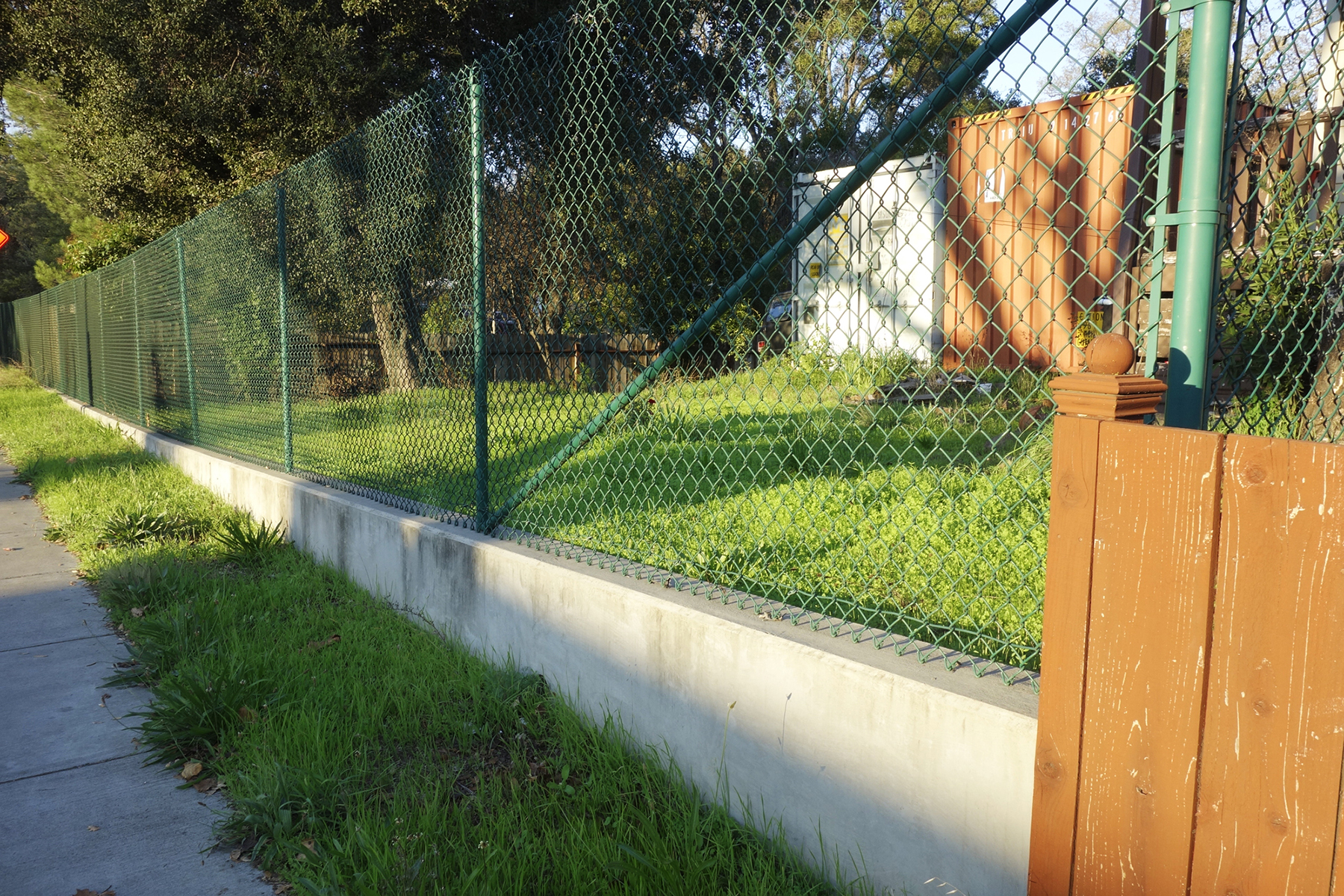 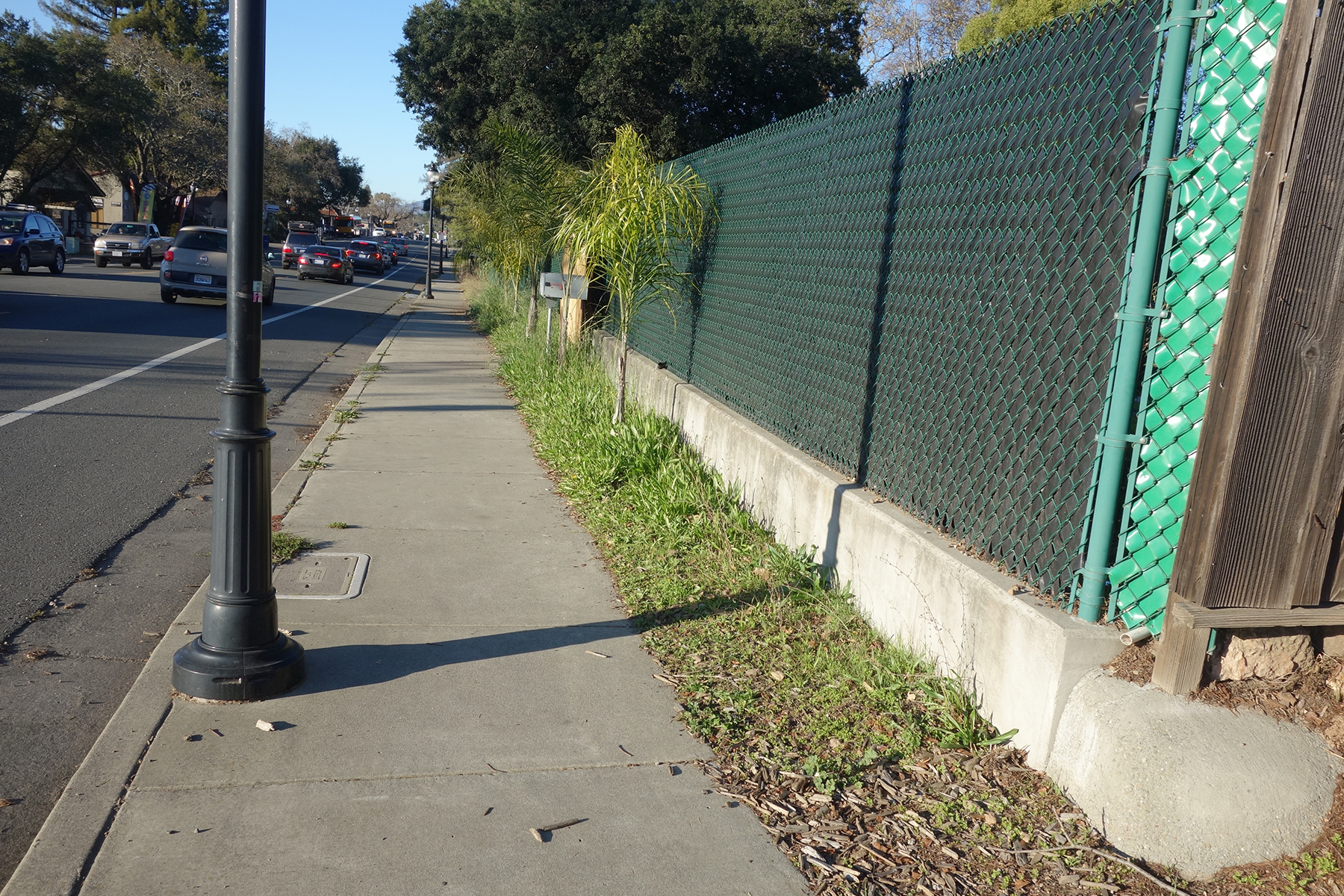 Other examples of wasted space.

The new sidewalks, streetlights, and other amenities provided by the project are much appreciated in the community. It’s a shame that the interstices of the design were not dealt with originally, but they now represent an opportunity for creativity and community engagement. Let a hundred fledgling landscape architects bloom!

How old does something have to be to be considered “historic?” 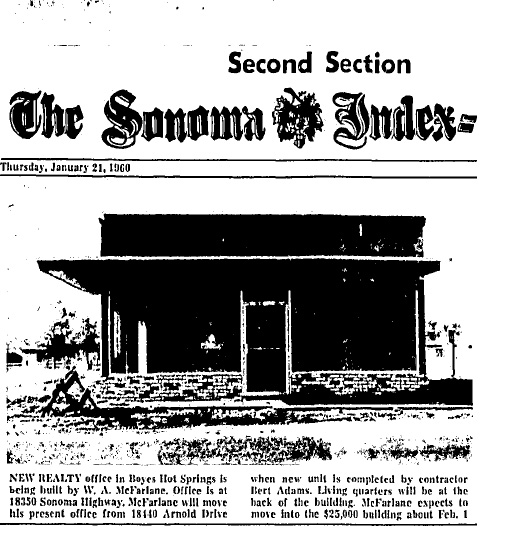 The modern commercial building, with housing in back, was built in 1960 by real estate agent W. A. McFarlane. McFarlane practiced his profession through the 1960s, possibly at other locations. He died in 1975.

The gap in this story is a long one; between the 1960s and 2000, when Nola Lum Hsu filed her Fictitious Business Name statement for the Golden Garden Restaurant. It’s also during this period that the brick-faced addition appeared. 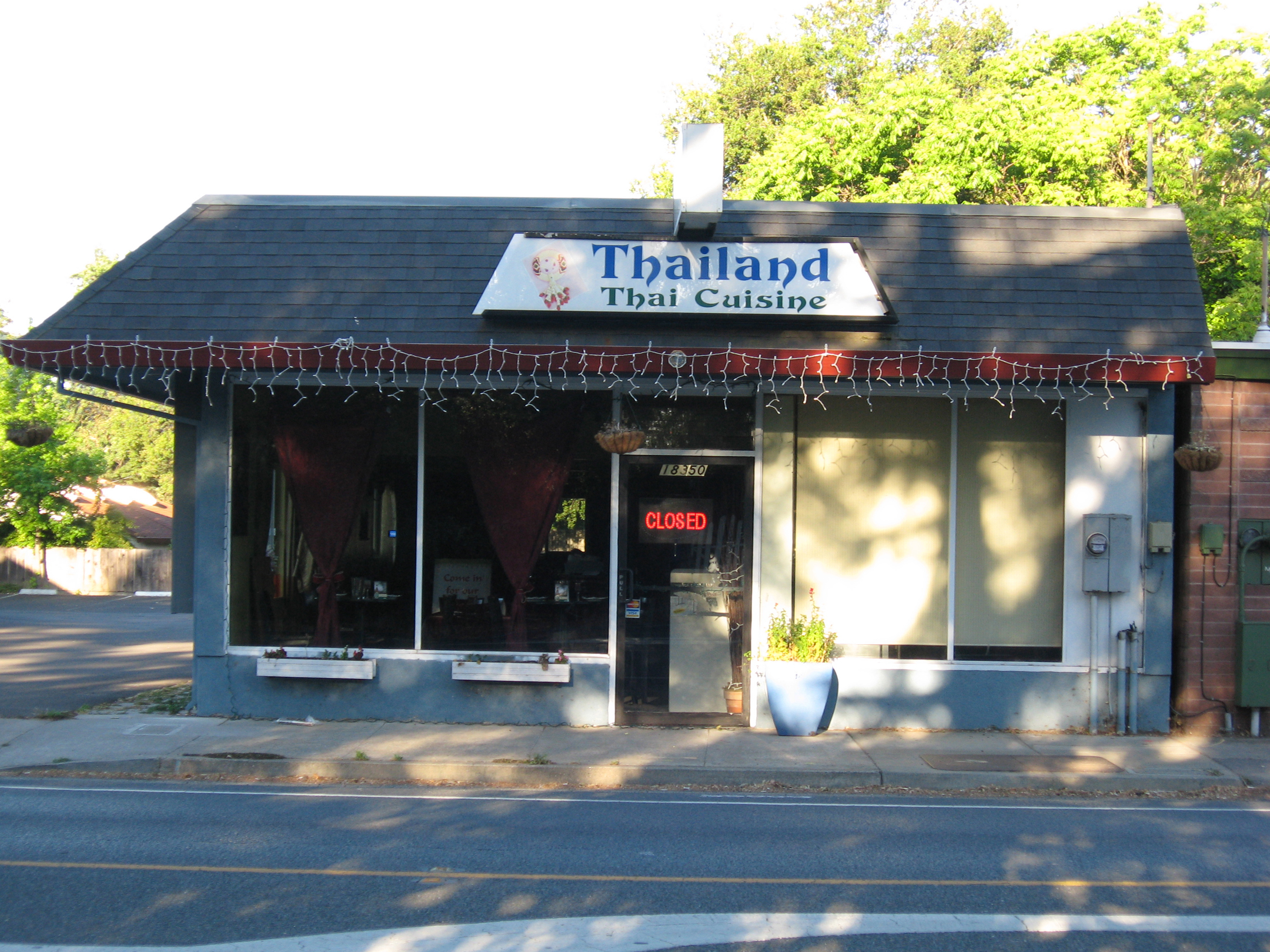 Thailand Thai took over from Golden Garden in 2008.

The building was vacant in 2010 but Norm Owens was getting ready to open his Hot Box Grill that year. 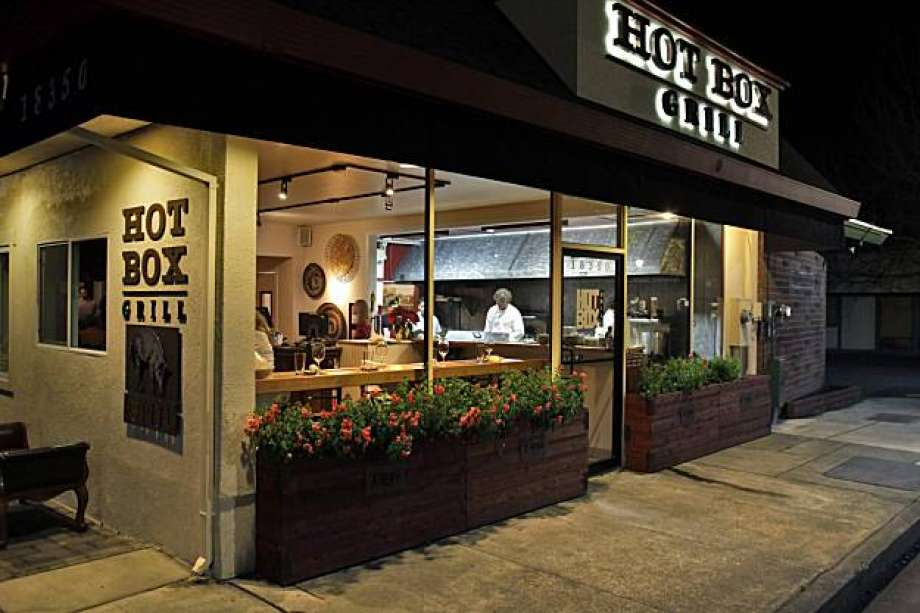 According to Sonoma Magazine

Chef Rob Larman opened Cochan Volant in 2016, complete with the flying pig sculpture by Brian Tedrick, on the roof. In 2020, it continues to pump out fragrances that stimulate the salivary glands.

Please comment if you can fill in the gaps in the story of this building.

Circa 1910. Located in Boyes Hot Springs, adjacent to the railroad depot. This building may still exist. 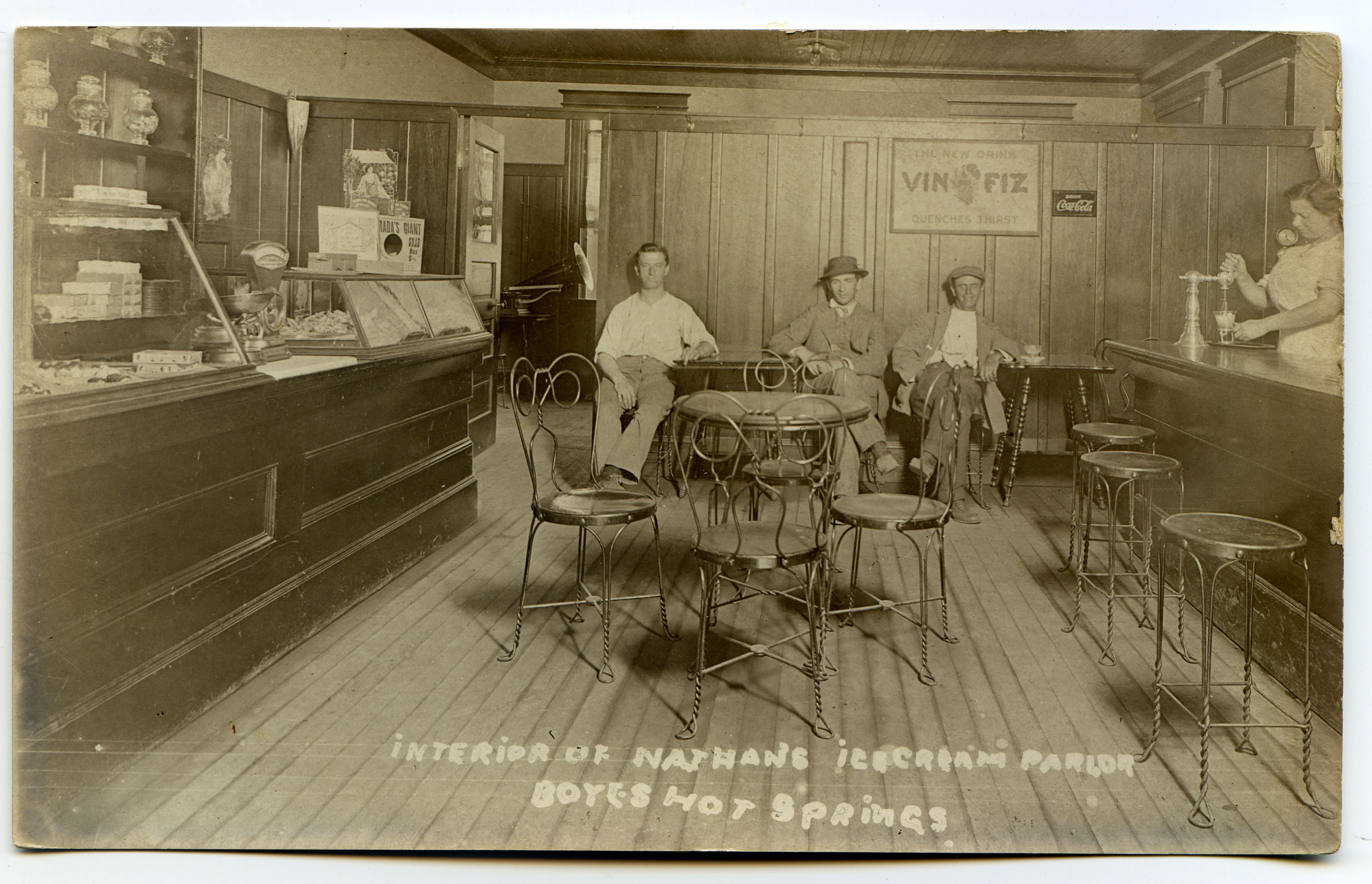 On December 20, 1956, the Sonoma Index Tribune reported “Old timers in Boyes felt some remorse this Monday when the old stately palm tree in the Boyes Plaza was cut down to make way for a new building.” The new building was the second half of the Plaza Center building, which houses the post office today. The IT went on, “They (the old timers) could remember standing beneath that tree when the old train used to unload vacationers at the railroad station, located years ago, right near the tree.” 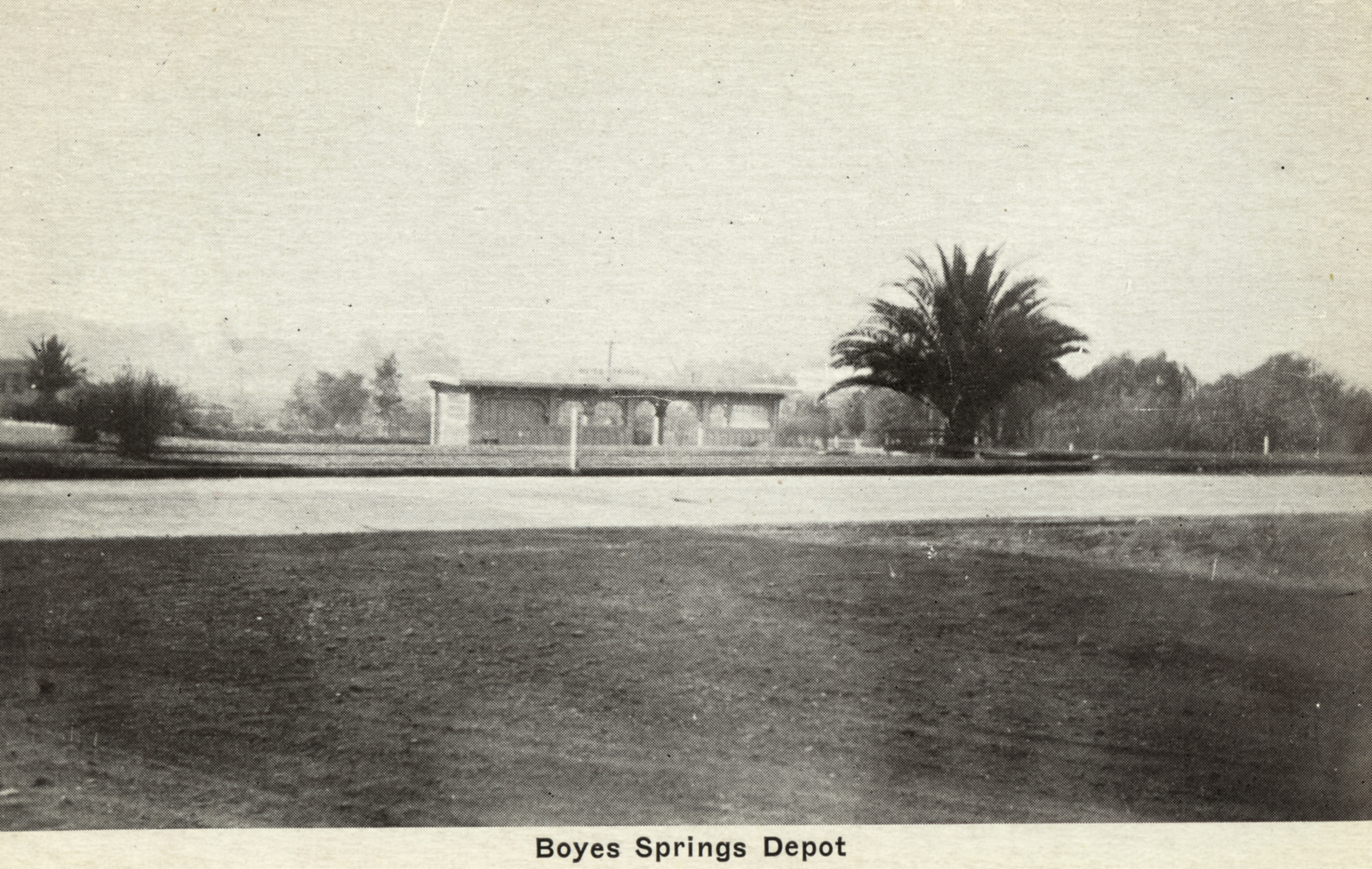 Yes, there was a Plaza in Boyes Springs. It existed as part of the land owned by the Northwestern Pacific Railroad. A railroad map from 1925 shows an elongated lozenge shaped feature, parallel to the tracks, bisected by pathways at right angles, and with a circular form at the center. The palm tree was there, according to an aerial photo from 1943. 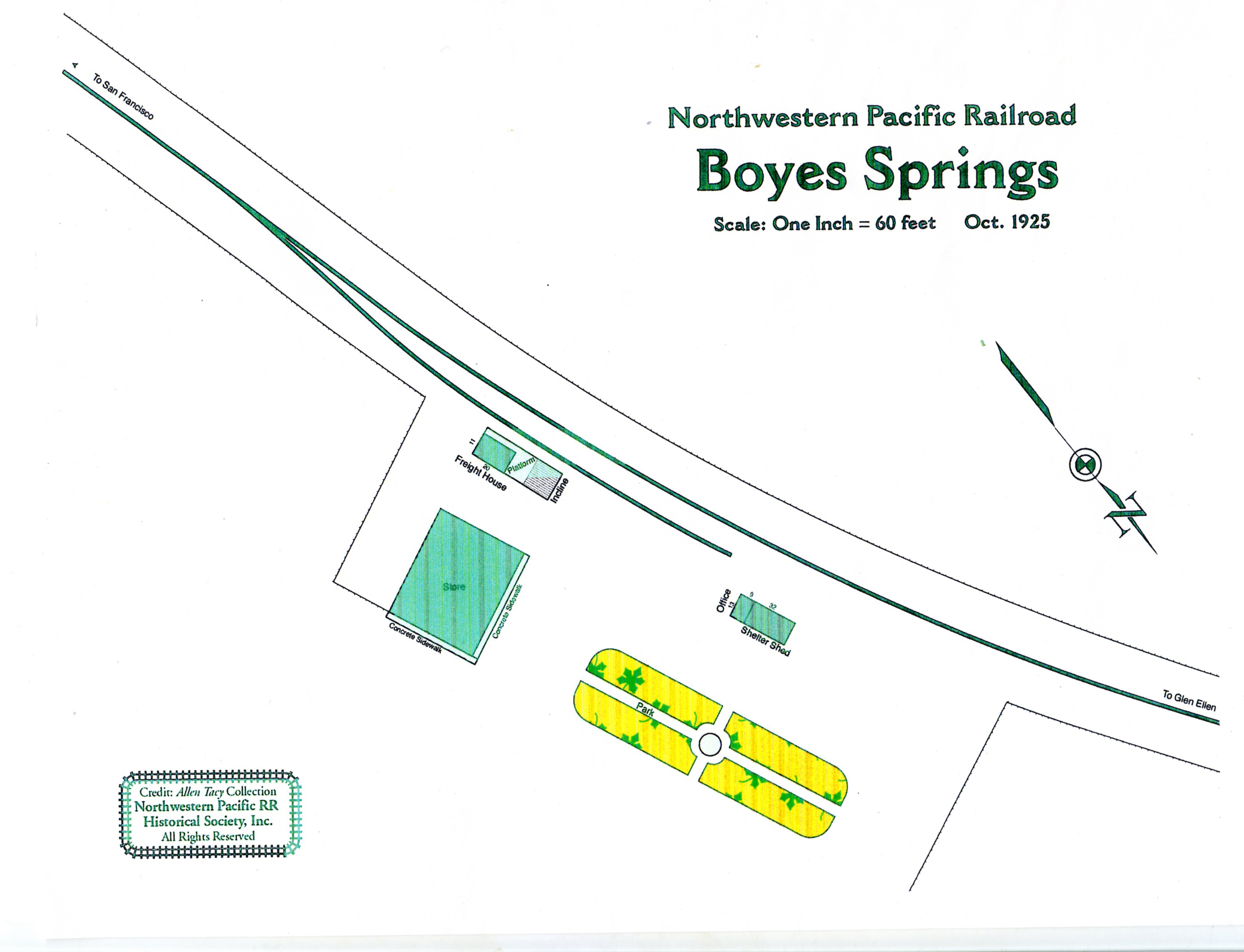 In 1941 plans for the celebration of the centennial of the Bear Flag revolt included an event at the BHS Plaza.

In 1949, the community celebrated its own “centennial.” How 1849 was chosed as a founding year is unclear. The hot springs had been commercialized by 1847 by Andrew Heoppner. Thaddeus Leavenworth arrived in 1849, but Boyes didn’t show up until 1882.

At any rate, the editorial page of the Index Tribune approved.

The idea of a new Boyes Hot Springs Plaza has resurfaced in recent years. Several architects have produced conceptual plans. Below is the Ross, Drulis Cusenberry version. 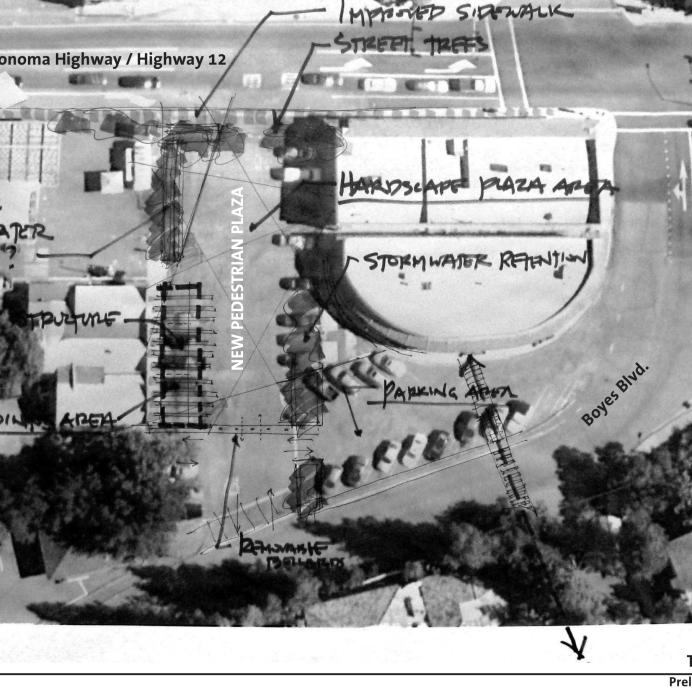 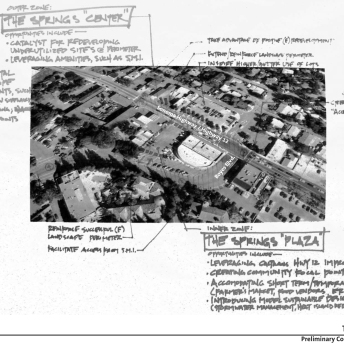 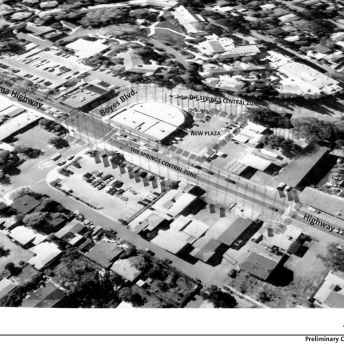 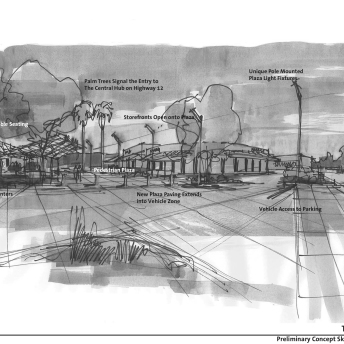 This is the key historic building still standing in Agua Caliente. Apparently undergoing demolition-by-neglect, it has, in August 2018, gotten a set of new windows and a paint job. We can only hope that the structure behind the stucco still has integrity.

Before the new paint, the ghost of the word “Mexcian” could be seen near the sidewalk. Various restarants and markets have been housed in the building. 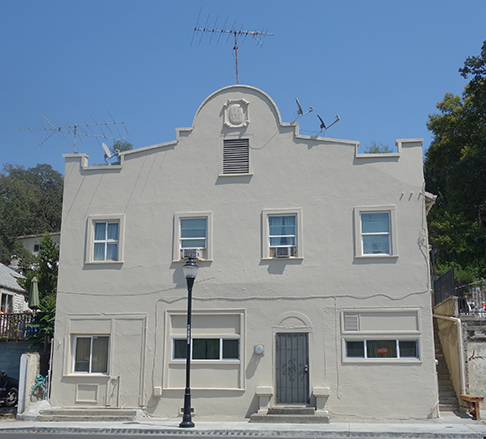 After paint. The windows still have the factory sticker. 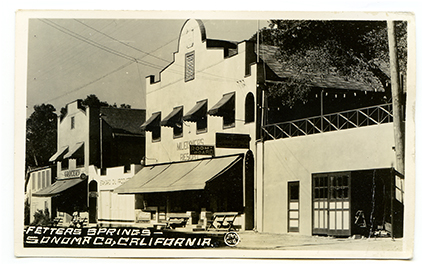 In the days of Liexner’s Resort.