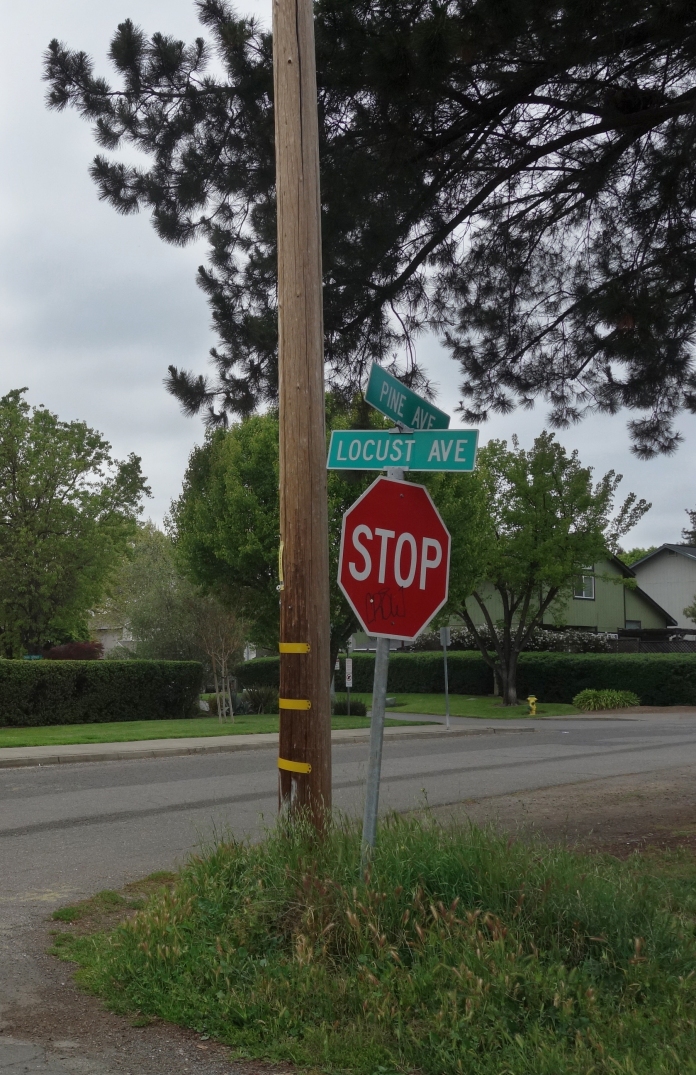 Pine Avenue is shown on a County recorder’s map “Hotel Grounds Subdivision” which dates to before 1923. On that map there is a canal, starting near the hotel, crossing Boyes Blvd., and running down Pine Avenue. It ends in a large pond adjacent to the entrance of the Bath House. The canal did not exist long, if at all. Photos of the Bath House entrance from the 1920s show no pond.

The Boyes Bath House in 1910. The end of the canal would have been somehwere at the right. The entrance to the Bath House was on Pine Avenue.

This pond was in front of the “Old Hotel,” which was located where the Sonoma Mission Inn is today. Possibly the origin of the Pine Avenue canal.

On the fourth of August, 1916, the Boyes Hot Springs corporation, which owned all the land around the hotel which is now the Sonoma Mission Inn, sold lot numbers 155 and 156 (actually on Northside St., parallet to Pine) of the Hotel Grounds subdivision to Mary O. Cookson. She was enjoined by the boiler plate language of the “indenture” (deed) not to drill for water and, in the overt racism typical of the day, not to allow the occupation of the property by “Asiatics or negroes.” 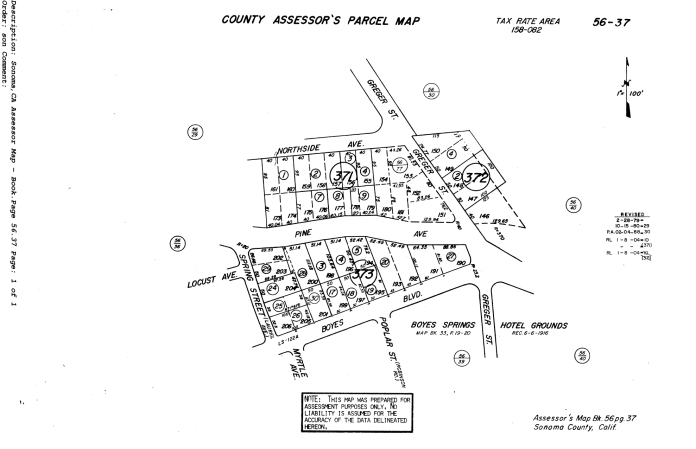 The signers of the deed for the Corporation were Henry Trevor and R. G. Lichtenberg. Lichtenberg became a proprietor of the Boyes Bath House, and a street is named for him in that vicinity. 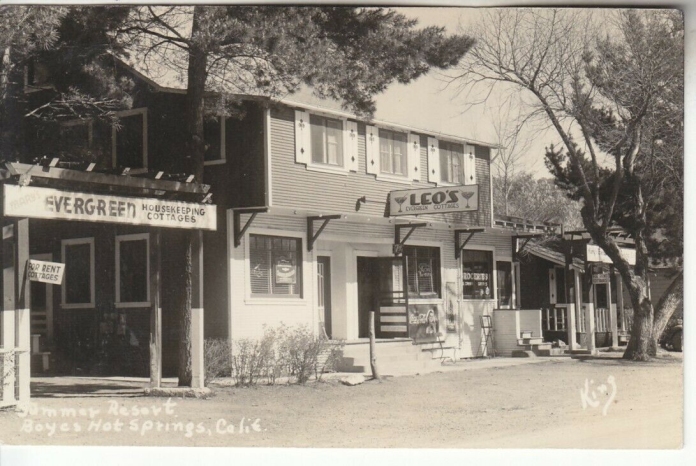 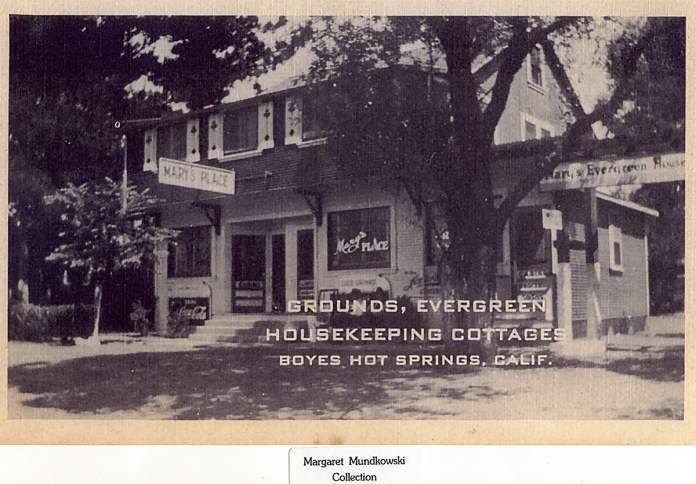 The principle resort on Pine Avenue was the Evergreen Cottages, which dates from the early 1920s. The main building, housing a bar know variously as Mary’s or Leo’s was on Pine, but the resort extended to Northside St. In the center of the cottages was an open area said to have been a boxing ring. This is plausible as the training of fighters was common in the Springs in the era before WWII. Louis Parente was well known for hosting workouts at his place in El Verano.

In February of 1940 the Index Tribune and dozens of local businesses welcome the San Francisco Seals to the baseball grounds at Boyes Hot Springs for spring training. Among them was Mary’s Evergreen Cottages. Their boxed ad boasted “dancing, sulphur baths swimming.” The baths and swimming were courtesy of the Boyes Bath House at the end of Pine Avenue, and dancing might have been in the large square area in the center of the cottage cluster.

On September 16, 1949, William Johnson and Milton Gregor, proprietors of the Boyes Bath House, leased Leo’s Evergreen to Thomas Mayhew and Celanire Mayhew. The Mayhews gave notice, the same day, that they would engage in the sale of alcoholic beverages at the Evergreen.

In April of 1951, Ruby Coronas bought the Evergreen Resort from Johnson and Greger.In 1955 she celebrated the fourth anniversary with an ad in the IT. 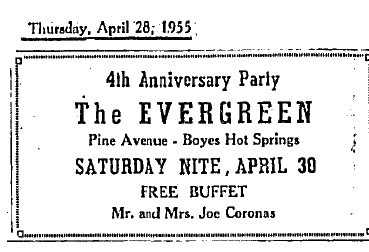 In May of 1954, the Jack London Lodge of the American Legion hosted a candidates night at the Evergreen Resort. “Post commander Ed Reedy said that all candidates for federal, state, and county offices had been invited to be present, and that “most of them” had signified they will attend…” According to a June 3rd article in the IT, some of the candidates were Charles E. Greenfield, for state senator, 12th district, Oscar Larson for a Republican central committee post, and James J. Manning, of Boyes Hot Springs, unopposed for constable in the Sonoma judicial district. (Do we still have a constable?) Interestingly, among the polling places was Perkin’s Memorial Hall on Agua Caliente Rd., location unknown today. The Verano East polling place is listed as the Grange Hall on Highway 12, showing how notions of the boundaries between communities shifted over time as the (former) Grange Hall is now considered to be in Boyes Hot Springs. Archaic places names that had polling places included Cooper, Eaton, and San Luis. 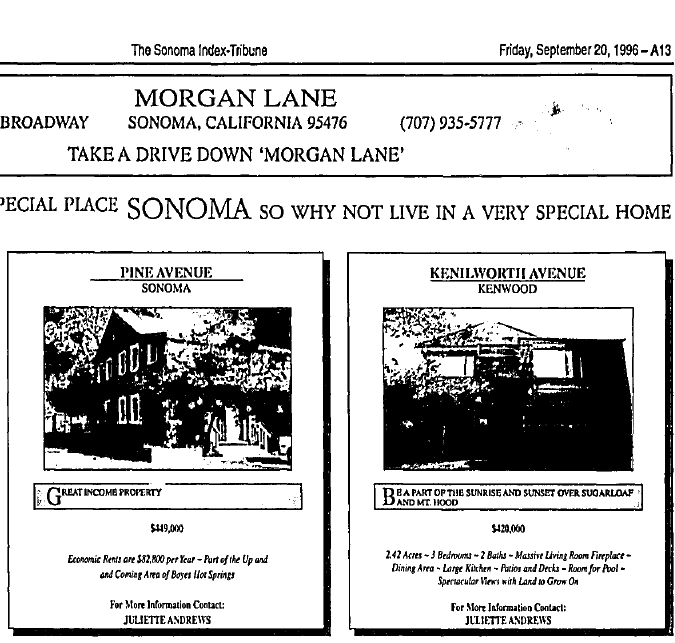 Another resort on Pine was the Golden Oaks, which was on the corner of Pine and Northside, or Pine and Gregor, depending on which source you chose. In a 1968 article the Index Tribune gave the address as 130 Pine, which would put it at the Gregor end.

The first mention of the resort in the IT is in 1932. From 1938 to 1950 a Mr. and Mrs. Zinkulsen owned and operated it. In 1950 they sold to Bertha I. Donnelson. In the notice of the transaction the Golden Oaks was said to consist of eleven cottages and an owner’s residence.

Apparently Pine Avenue was a rough place in 1950. Around 11PM on September 8 of that year a street brawl broke out between seven young men, according to the IT headline. However, in the story it turned out that twelve youths were arrested and three were in the hospital, one with his “belly cut open.” He survived. 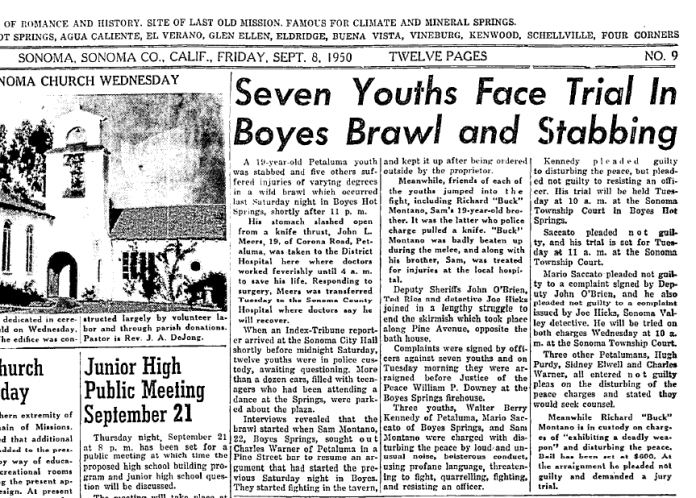 16 Pine Avenue was an interesting looking building. Apparently a store, it was in use as a residence up to 2009. It was boarded up in 2010 and demolished in 2019. In 1969, the federal Office of Housing and Urban Development was contacted by Boyes Springs Resort owner Luis Vela about a redevelopment program for the Springs. According to the IT, “Vela said he had conferred with HUD officials and others from San Francisco on the Boyes redevelopment plan. Preliminary proposals set this up on a three-stage basis. The first area to be upgraded under such a pilot project, said Vela, might be the section between the creek and Highway 12…”

These photos, courtesy of Sonoma County Library, show an area, Pine Avenue, that could be included in the project. 16 Pine Avenue is shown. Redevelopment did no start in earnest until the late 1990s. We got sidewalks and street lights and some improvements to commercial buildings before Jerry Brown abolished redevelopment statewide in 2011. The sidewalk project was completed with county funds in 2016.

Photo collage watercolor by Michael Acker of a section of Pine Ave.

Index Tribune courtesy of the Sonma Valley Historical Society. Photographs and maps from the author’s collection.