There would be no reason for many people today to know the name Selig Rosenthal. I came across it because, as a Grange member, I got to look at the organization’s archives and saw the property plat. It didn’t take much digging to reveal the outlines of an interesting story, or several stories, one with a tragic ending. What spurred me to write was a conversation and walk around the property with its current owner, George Weiler, with whom I share an interest in the history of the site.

Dear Reader, please indulge me as I refine my style and methods in writing these articles. In the following I purposefully followed several digressions that begged for more information. This is interesting for me, but may make for pieces that are too long or hard to follow. If so, I apologize.

Rosenthal’s Resort was about ¼ mile south of the Boyes Springs depot, on the highway, on land bounded on the south by Agua Calliente Creek. In 2016 the property encompasses Acacia Grove Mobile Home park, E-Saan Thai restaurant, the old La Salette restaurant building, and surrounds the Sonoma Valley Grange property, which was carved out if the land in 1934. 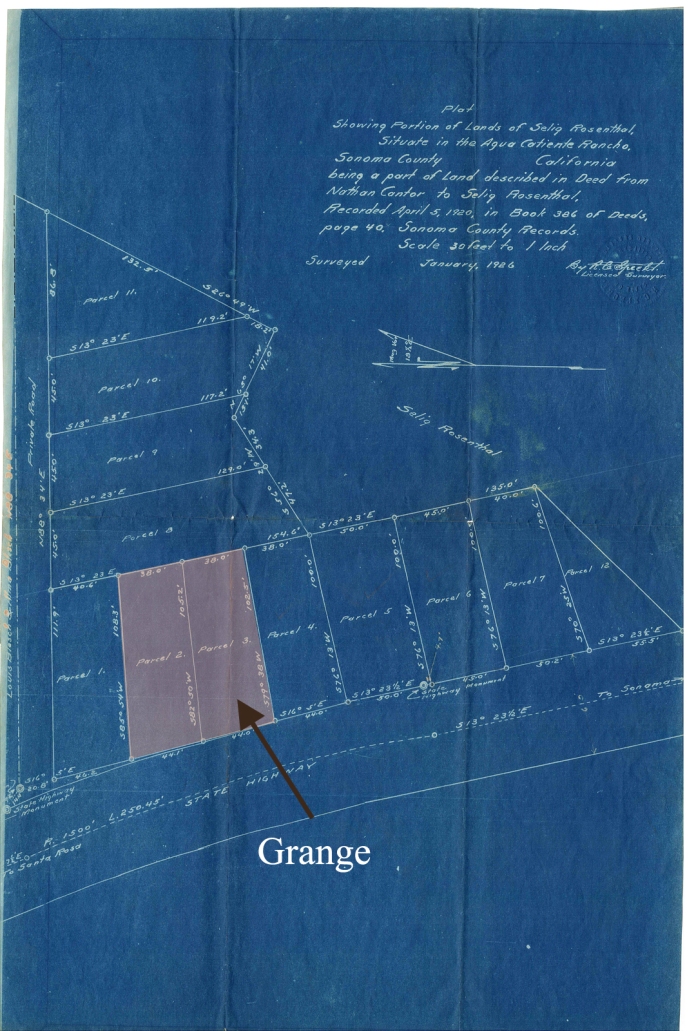 As the inscription on this plat states, the land was sold to Selig Rosenthal by Nathan Cantor in 1920.

The first mention of Nathan Cantor in the Index Tribune is in 1912 when we learn that “George Grose (sp) is erecting a first class windmill on the Cantor place in Verano.” (Here again notice the flexibility in place names. Cantor was just across Agua Caliente Creek from the Verano depot of the Santa Rosa and Carquinez Railroad, but that locale is frequently called Boyes Hot Springs.)

But in 1917, life was getting more dangerous…

And the resort business could become contentious.

On Thanksgiving Day, 1919, Nathan Cantor got into a “neighborhood feud” with two rival resort keepers, Tommy Farrell and J. Trahan. Cantor said the men attacked him and tore his clothes. His opponents said Cantor’s dog bit them. Cantor swore out a warrant and the assailants went before Judge Small. The results of that hearing were not reported by the Index Tribune.

In February of 1920, Nathan Cantor sold his resort to Dora and Selig Rosenthal.

The Index Tribune noted “the new owners are former popular and prominent residents of the metropolis and will no doubt continue to conduct the well-known resort with great success. Cantor’s Resort is one of the most popular in Sonoma Valley, and is crowded every season. Mr. Cantor and his partner, Jennie Boseck, will go to San Francisco.”

Rosenthal was off to a fast start, improving the resort, building some new cottages, some of which still stand in 2016, and planning a “$10,000 hotel.” 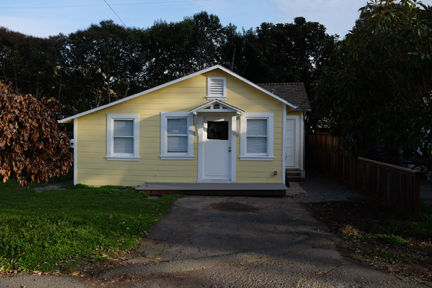 By 1922 the improvements at the resort included the new dance hall which had a maple dance floor 36’x 60’. The dance hall building was sold to the Sonoma Valley Grange in 1934. The building still stands, and still has the maple floor.

Dancing every night to the “four Piece Syncho-Harmony Orchestra!”

Selig Rosenthal became quite involved in the Chamber of Commerce, which was advocating for a road to Petaluma in 1924. He was also prominent in the Sonoma Valley Improvement Club (office said to be located at the corner of State Highway and Park Ave. The building may still stand, though closer to Mountain Ave. and the Highway. See map below.) In 1925 he ran for president of the Boyes Springs contingent. 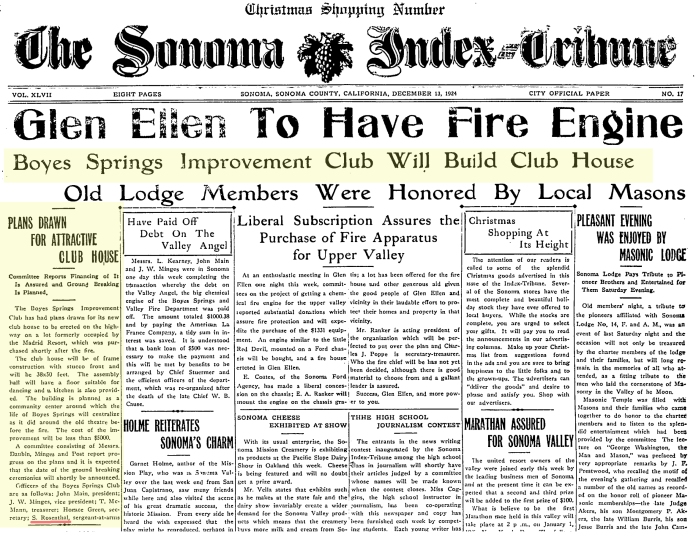 In 1929, Selig Rosenthal was “preparing plans for converting the property into an up to date auto camp,” said the Index Tribune, (calling it the “former resort.”) The ascendancy of the automobile over train travel spurred many resort owners to do the same. In January of 1930, the IT tells us “Rosenthal’s new auto-camp cottages are nearing completion, Stevenson Brothers Sonoma Vista contractors, handling the big job.”

Selig Rosenthal was a prominent member of the Jewish community in Sonoma Valley.In 1932 a group of “Jewish capitalists” from San Francisco And Oakland came to the Valley looking for 100 acres on which to build a “model Jewish city,” to be run as a cooperative. Selig Rosenthal was one of the property owners they talked with. They also placed this ad in the Index Tribune: 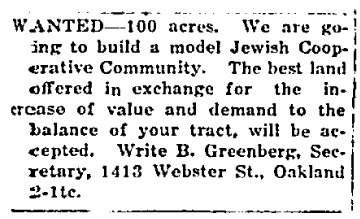 More research into the Jewish cooperative movement in the Bay Area is warranted.

Newspaper archive wanderings sometimes produce interesting unexpected results. A short article under the second page ending to the Jewish City piece, appears this, a heart-rending vignette of hard times in 1932:

In March of 1933 Selig and Dora Rosenthal announced their partnership with Harry Lyons, who ran a resort in Sonoma Vista (across the Creek from Boyes Springs), in the opening of “a high-class kosher resort, the only one in California…Mr. Rosenthal states that a benefit will mark the opening of the resort, at which noted Rabbis will speak and to which congresswoman Florence Kahn will be invited.”

The Rosenthal-Lyons partnership lasted all of five months, dissolving in September of 1933.

In April of 1934, the Sonoma Valley Grange bought Rosenthal’s dance hall, an event apparently  overshadowed only by the opening of the Sebastiani Theater, according to the I-T.

In 1934 the Rosenthal’s opened a cafe in San Francisco.

In 1935 the Rosenthal’s tried to sell their resort, but the deal fell through. 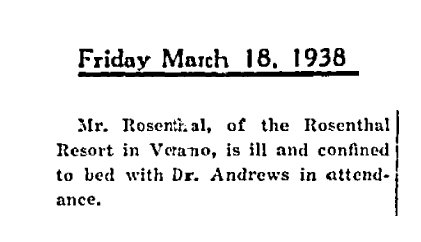 According to the Index Tribune, Rosenthal had been in ill health since 1935, and this was cited as the reason for his attempt at suicide. The article says “Rosenthal is recovering,” but, curiously, speaks of him in the past tense in the final paragraph.

Rosenthal succumbed to his illness in December of 1938. He was buried in the Jewish Cemetery in Petaluma. 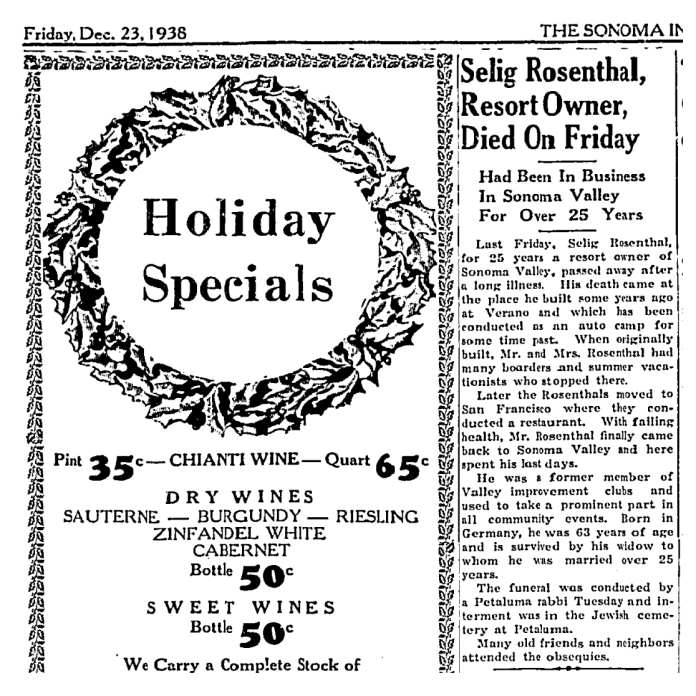