The resort was located on the east side of Sonoma Highway, near the corner of what was then known as Sonoma Avenue, now Marin Avenue. The Agua Caliente post office was reportedly located in one of the resort buildings.

In a 1941 article, the Index Tribune located the resort across the road from (the old) Flowery School, which was at the corner of Vailetti Drive. 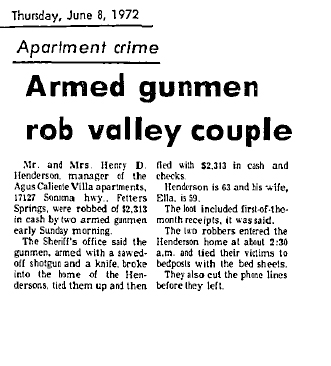 In this alarming article from 1972, the address is listed as 17127 Sonoma Highway.

The founders of Caliente Villa in Agua Caliente are not known, but we do know the resort was owned by A. Nevraumont by 1917. Nevraumont was an early resort owner in El Verano, having established El Verano Villa before the turn of the 20th century. 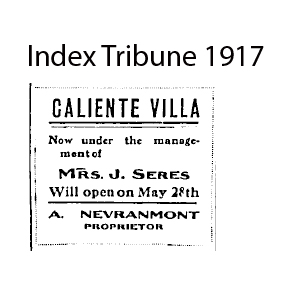 In 1923 the buildings changed hands. 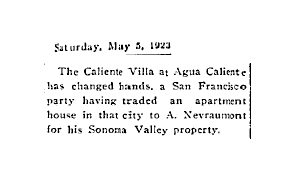 In fact, the Villa went through many owners and managers. In 1920 Mrs. Lewis and Miss Ross were in charge. They…”have leased the (resort) and will conduct the popular springs resort on the apartment plan…” Along with “modern conveniences and comforts,” the new proprietors would provide “a long distance phone” and a “classy jazz orchestra!”

That same year, Lewis and Ross entertained “twenty four members of the Salt Lake City baseball team…Mrs. Lewis and Miss Ross were assisted by a number of young ladies…There was dancing, music and card playing…” and “everything was complimentary, including the smokes, and the boys report a swell time.”

Jack Valente (his name is seen under Caliente Villa in the sign) ran the resort as of 1940. The term “auto camp,” however, was in use at least from the early 1920s. Automobile tourism in Sonoma Valley started before the opening of the Golden Gate Bridge.

Note the dormers on the three buildings shown in the photo.

Several of the buildings were in existence in 1984 when Dan Peterson made his Historic Resource report for Redevelopment.

The development proposal in 1986 probably resulted in the demolition of 17127, and it looks like the 20 multifamily units were indeed built. 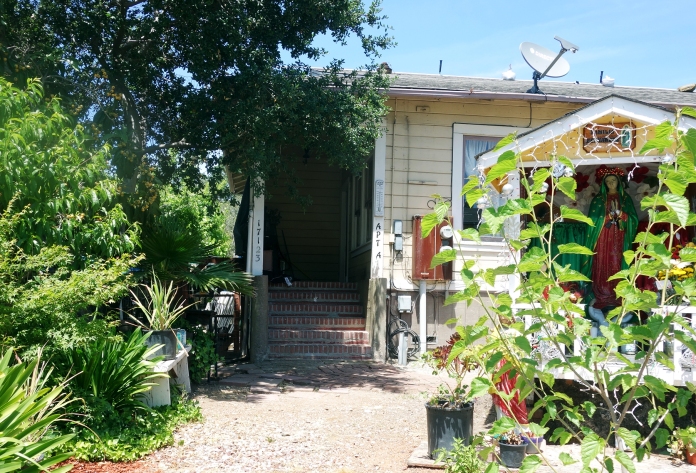