In July of 1911, the Sonoma Index Tribune reported that “A.D. Graham of Graham’s Cash Store received the appointment as post master of Boyes Springs. Located at his store.” The exact date was July 8, 1911. The location of the store, now not know exactly, was near the train depot at Boyes Blvd. and the Sonoma Highway.

That building was lost, along with most of the town in the fire of 1923. After rapid rebuilding, the post office was located in the Woodleaf Store. It stayed there until 1951. The Woodleaf became the Big Three Diner, part of the Sonoma Mission Inn. The post office relocated to the Plaza Center building at Sonoma Hwy. and Boyes Blvd. when it was built in 1951, where it is today. Prior to 1951 this site was know as the Boyes Springs Plaza and was the scene of street parties and fiestas. 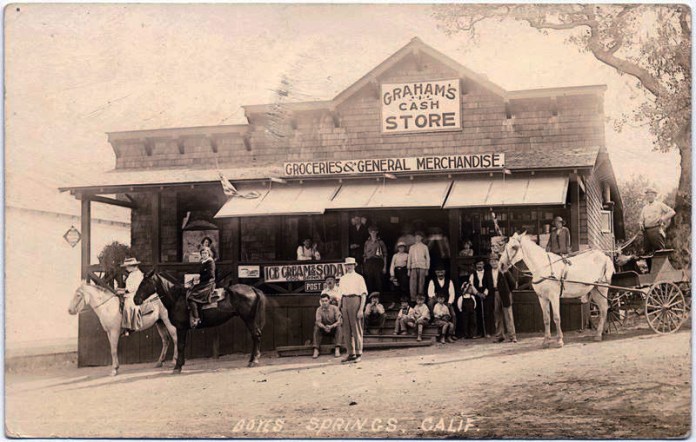 A.D. Graham was the first postmaster. The name was changed to Boyes Hot Springs at some point. Courtesy California State Library

In 2011 we celebrated the centennial. To produce the joyous event, we had the help of the USPS and its employees, Sonoma County, the owner of the Plaza Center building, Kickstarter donors, the Springs Community Alliance, and many volunteers.