Frank Greengrass started out as an insurance salesman. He started working with Realtor Sol Becker in 1953, an event that rated right up there with the arrival of the Green Bay Packers ( though they were the “cellar dwellers of the National Professional Football League!”)

In February of 1956, Frank Greengrass located his real estate firm to the newly remodeled building at 18340 Sonoma Highway. (On the same page the grand re-opening of the Woodleaf Market (https://springsmuseum.org/2018/11/07/the-woodleaf-store-big-three/), also remodeled, was announced, along with the relocation of attorney Jack Coffey’s practice from San Francisco to Boyes Hot springs, with offices in the Greengrass building.) Note also that the Boyes Bath House had record crowds and that “Mr. and Mrs. Frank Burmis of Sonoma are proud owners of a brand new 1956 seafoam green Cadillac Coupe DeVille…” Times were high in Sonoma Valley!

The 707 area code was introduced in 1959. The building burned in 1979, dating this photo in a twenty year span

The date of construction is unknown, but possibly early 1950s. The original owner is also unknown. Please comment if you have information.

In 1963, part of the space in the building was rented out to Nick’s Barber Shop.

The Greengrass firm, renamed Sonoma Properties, prospered, it’s ads in the IT becoming bigger by the year. However, on May 17, 1979, the building burned to the ground.

Incredibly quickly by today’s standards, one year and one week later, Greengrass, with the help of architect Victor Conforti, Lely Construction, and a host of other tradesmen and suppliers, opened his brand new building at the same address. He invited the public to the opening with a full page ad in the Index Tribune. 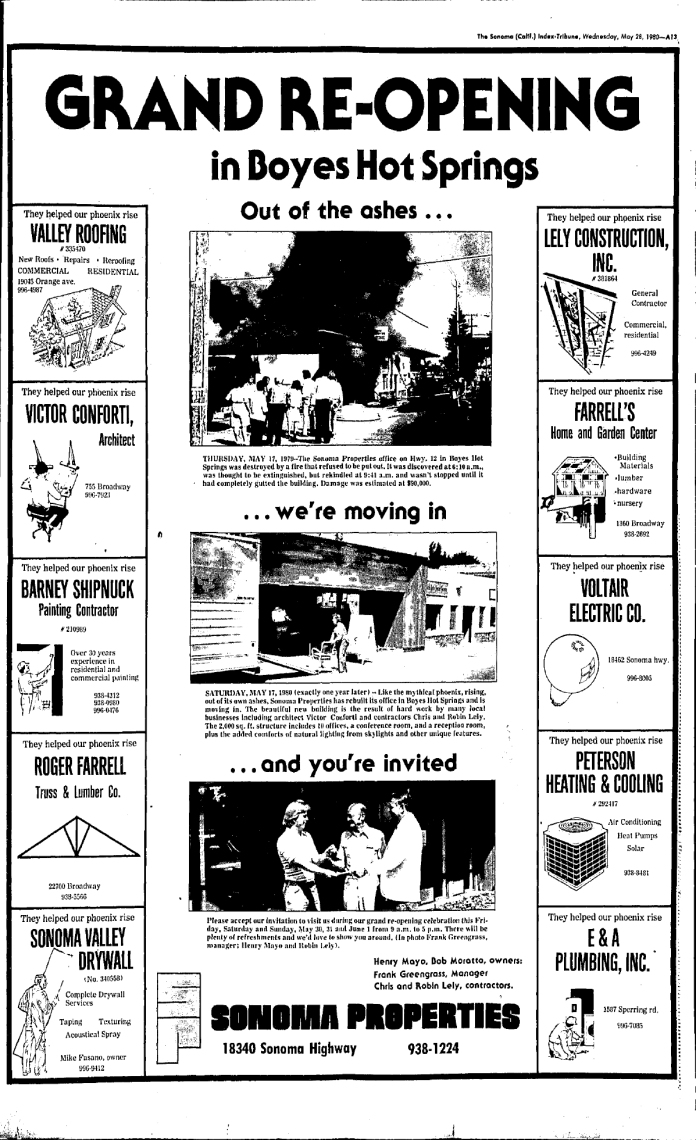 The building next door once housed Zan Stark’s Valley of the Moon Daily Review newspaper. See the Zan photo below. 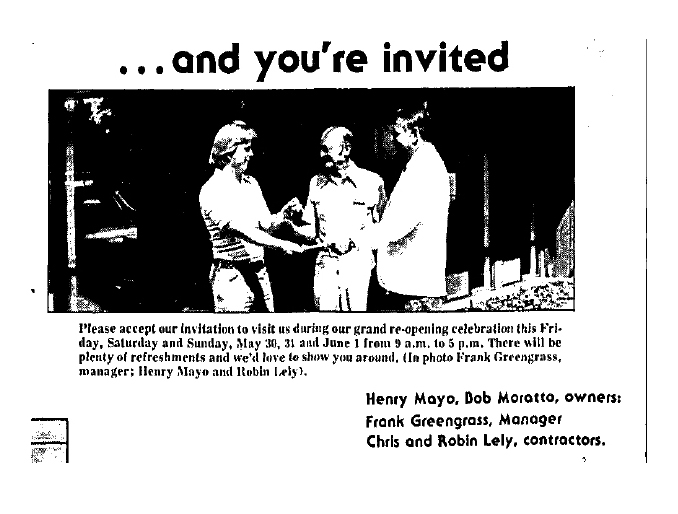 Greengrass had sold the building to Henry Mayo in 1972. 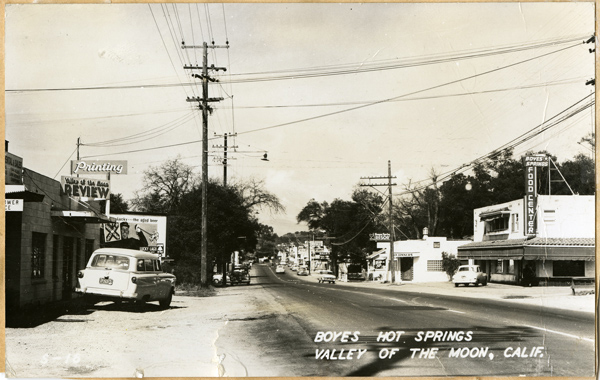 Sonoma Properties continued in business at the Sonoma Highway address until December of 1989. In December of 1990, La Luz opened in it first location in the building.  La Luz moved to their current Gregor Street location in 1993. 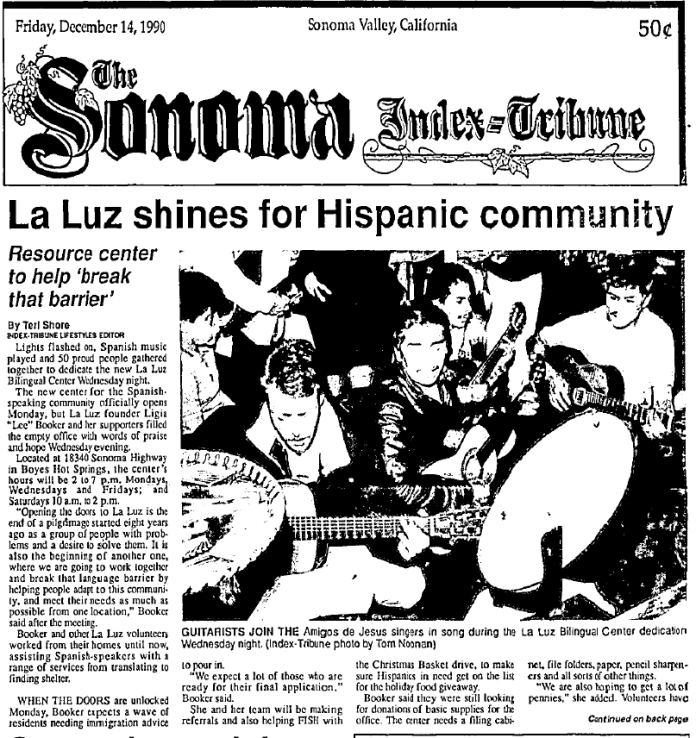 In the 1990s, the Index Tribune published news in Spanish.

The years 1993-2002 remain a mystery unresolvable through the Index Tribune archives. Please help!

In 1999 the Springs Unity Partnership (Springs Up) was founded to “help the residents of El Verano, Fetters Hot Springs, Boyes Hot Springs and Agua Caliente improve their communities and gain representation at the county level.”

In 2002 Springs Up established a nonprofit and opened the Springs Resource Center at 18340 Sonoma Highway. The Center hosted meetings, classes, and workshops under executive director Julie Zak. The nonprofit’s board was led by Steve Cox.

According to Ms. Zak, “the effect of 9/11 took its toll on most Sonoma Valley non-profits and the board of Springs Up chose to fold rather than competing for funds that would impact longstanding non-profits in the community. The assets of the non-profit were distributed throughout the community before closing doors in 2004.”

Editorial aside: The original goal of Springs Up, to “help the residents of El Verano, Fetters Hot Springs, Boyes Hot Springs and Agua Caliente improve their communities and gain representation at the county level,” is very much needed today. Would that it could be a model for future action. If so, can we get Julie back? Please? 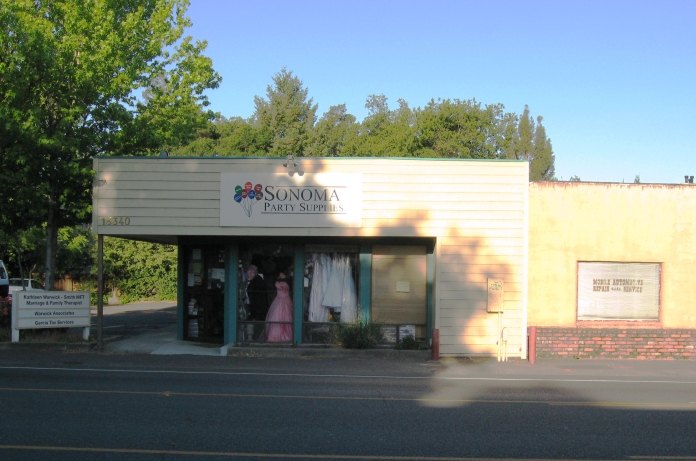 In 2008 the building housed a party supply store. Note the absence of sidewalks and street lights. The sign in the window next door says “Mobile Automotive Repair and Service.”

By 2012, the Metro PCS store was in place, as it is today (2020) and the building next door was colorfully painted. 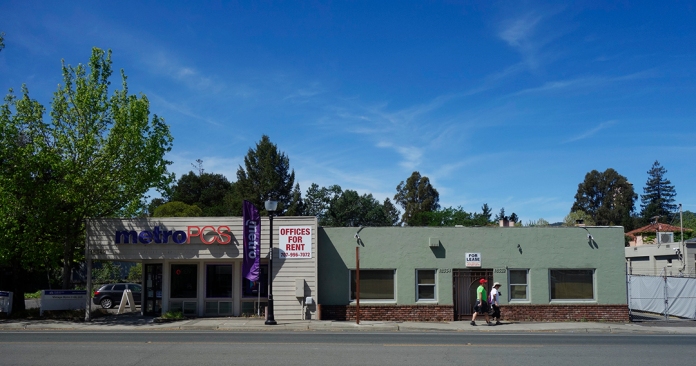 Index Tribune courtesy of the Sonoma Valley Historical Society. Other photos by Google Street View, the author or from the author’s collection.