Mr. Wolf Baron (sometimes Wulf Barron) announced the construction of the Coney Island resort on his tract of land in Boyes Hot Springs in December of 1922. Construction started in January 1923. The Index Tribune described it this way: “Sonoma Valley’s amusement park and tent city modeled after one of the leading resorts of southern California has been started. The park project is being financed by Wulf Barron (sic) and is being built on the 39 acre tract owned by Barron at Verano. There will be 30 summer cottages to occupy the shady bands of Sonoma creek, swimming pool, children’s playgrounds, etc. On the highway there will be a big amusement hall for dancing and pictures, restaurant, bowling alley and modern gasoline service station.”

Then in July: “The $100,000 amusement park at Verano[1] had scarcely opened its doors before financial troubles loomed. The Patriarchs’ Militant Band[2], who played at the opening, first attached the place, but their attachment has been lifted. Among local creditors are a lumber company and hardware firm.” 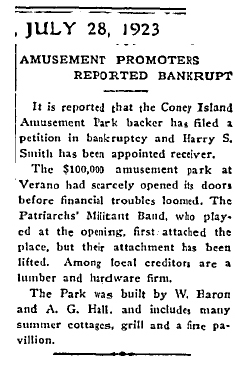 [1] Boundaries between communities in the Springs are and have been flexible. Baron’s Villa Tract, on the Highway just north of Agua Caliente Creek, is considered to be in Boyes Hot Springs today. Rosenthal’s Resort, opposite Baron’s, was also sometimes placed in Verano. However, on maps it appears that Verano is on the south side of Agua Caliente Creek. See maps.

[2] I wonder what they were militant about?

The paper was not shy about touting Harry Fine’s “pull” with the sheriff’s office. Cigarettes were cheap.

Things got so bad for Wolf Baron, that rumors circulated that he had been confined to Napa State Hospital. These were unfounded.

Baron was out of the picture, but Coney Island was still a popular venue, this time for “pictures.” In September of 1923, film producer, director, actor and flimflam artist Harold “Josh” Binney leased Coney Island for the headquarters of his company, which was supposed to turn Sonoma into Hollywood North. He started work on a proposed series of silent comedies, but, after cashing a bad check, he decamped to Montana. Evading extradition to California, he was instead arrested and tried in Montana for a similar scheme. After serving time in Montana, he went on to have a long career in Hollywood including directing Cab Calloway in “Hi De Ho” in 1947. The film Binney shot before his departure is an important historical archive of Sonoma Valley. (More to come on Mr. Binney.)

The intrigue continued in 1924 when a Mrs. Soito filed a slander suit against Mr. and Mrs. Harry Smith, who were the caretakers at Coney Island at the time.

“A rift in the lute (?!sic!) of this year’s Boyes Springs Carnival when rivalry in the queen contest broke up the committees and led to open warfare between the contestants…” a scenario worthy of Christopher Guest. (and what does “a rift in the lute” mean?)

“Mrs. Soito, who is the mother of Harriet Hunt, one of the pretty little girls who was out for queen, alleges in a complaint filed at Santa Rosa, that Mrs. Smith, mother of the dancer and the May-pole queen defamed her in a conversation to which there were witnesses.”

Originally Mrs. Smith was charged with disturbing the peace for a dustup at Flowery School. She pled guilty and received a suspended sentence. The Smith’s were said to be “experienced show people.” And Mrs. Soito “a member of a prominent family of Contra Costs county.”

In 1924, the Sonoma Valley Athletic Club was promoting boxing matches in the Pavillion.

In 1925 there were dances under the auspices of local bigshot Louis Parente.

Apparently Parente gave up on the resort soon after.

The annex to the pavilion burned in 1927, and in 1928 the pavilion itself was destroyed by fire, “and now only ashes tell the tale of the venture of a San Franciso tailor went into and failed,” the Index Tribune said. (Baron was one of several tailors, most of then Viennese, who came to the valley from the City to pursue their trades and other businesses. See the post https://springsmuseum.org/2019/05/27/leixner-nimpfer-weghofer/

The IT also tells us “The Coney Island site has been one with a history of ill luck. Twenty years ago (1909) a beautiful massive structure, known as Marble Hall, was put up there, and it mysteriously burned shortly after construction. The marble pillars stood for many years, a monument of the enterprise that went up in smoke.” The pillars can be seen in the photograph of the Binney studio, and several can still be found a sites around the valley.

By 1931 the Baron tract had been subdivided into building lots and houses were constructed.

And there our story ends, pending new finds.