From earliest European settlement (and possibly before), the Valley of the Moon was a place of rest and healing, but by the late 1890’s excitement was added to the activities: show business. First and always there was music. Theater and the spectacle of the circus were also popular. Movies arrived by 1917.

The following is a sampler of the variety of music available at the resorts.

Art Hickman had been coming to Sonoma Valley since 1910. He was a newspaper man who became the leader of a popular band in San Francisco. He is sometimes credited with inventing the word “jazz,” in Boyes Hot Springs. This dubious claim is fully discussed in Bruce Vermazen’s interesting article: http://www.gracyk.com/hickman.shtml

Hickman’s arrival in Boyes Springs was front-page news in 1923. (No elucidation as to the nature of his accidental burns is given.)

In that year, Prohibition was in force, which did not prevent the resorts from offering refreshing beverages to their guests, to enhance their musical appreciation. As we see from the headline, the El Verano resorts were “Again Raided.” 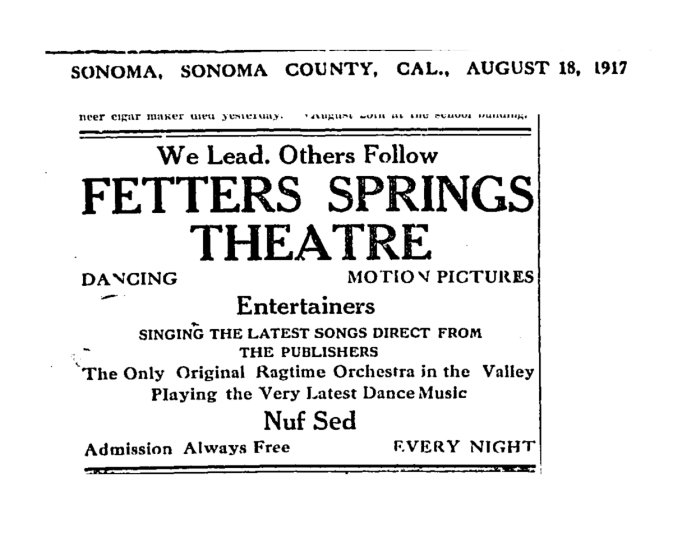 Was Nuf Sed the name of the “Original Ragtime Orchestra…” or just an emphatic statement?

It looks like a circus troop in this photo, marching with a band. The stamp on the reverse dates the card to 1909.

Some of the musical offerings were more high-toned. A Ladies Singing Society would be very refined.

Between 1920 and 1950 there were over a dozen ads in the IT for “Hard Times” dances. Attendees were expected to come dressed in stereotypical farmers’ clothing, and decorations leaned towards hay bales, wagon wheels, and animal harnesses. The music for this 1928 affair, held at the Boyes Springs Club House, was provided by Prof. G. Nimpfer, who was originally a tailor and had run a resort in Agua Caliente under his name. What discipline his PhD was granted in is not known. 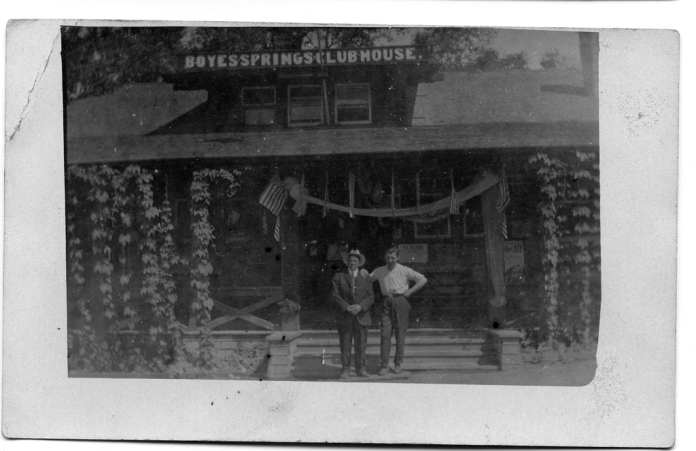 Paul Marcucci’s “Hill billy Band” from 1933. Marcucci was a talented musician and song writer who presided over Paul’s Resort for three decades in the mid-20th century.

Unfortunately described as a “negro orchestra,” the Funmakers featured Johnny Alston and Jeanne DeMetz. Alston and DeMetz recorded extensively. To get an idea of what they might have sounded like at the Fetters Resort, listen to this recording of “Sam the Boogie Man,” 1946, from the Prelinger Archive:  https://ia600604.us.archive.org/13/items/78_sam-the-boogie-woogie-man_johnny-alston-and-his-orchestra-robert-scherman_gbia0007741b/Sam%20The%20Boogie%20Woogie%20Man%20-%20Johnny%20Alston%20and%20his%20Orchestra.mp3 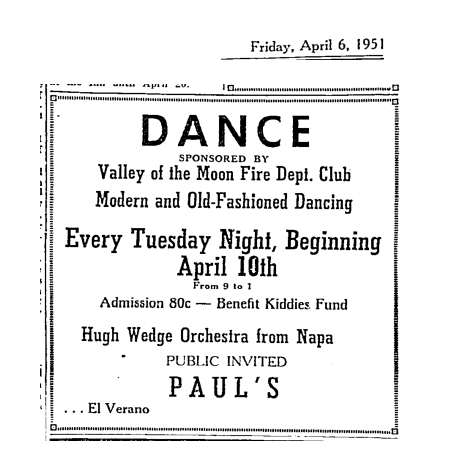 Hugh Wedge and his Melody Men were active in the Valley in 1950 and 1951. Obvioulsy versatile, they played for dancing of all eras (modern and old-fashioned).

Leon Pasco’s orchestra, “from Napa,” gigged a lot in the resorts from 1948 through 1953. Hugh Wedge was also billed as from Napa. Did they really hail from there, or was that puffery to make them sound more exotic? The Funmakers were billed as “direct from many smash engagements at New York’s most elaborate NIGHT SPOTS,” which probably had some truth to it. But “from Napa?” Not very enticing.

Anson Weeks was famous as the leader of the orchestra at the Mark Hopkins Hotel in the 1920s and 1930s. For more on Weeks, see https://soundcloud.com/peter-mintun/sets/anson-weeks-his-orchestrahttp://www.sfmuseum.org/hist1/weeks.html

In 1969 Pete Mancuso took over the old Resort Club in the heart of Boyes Hot Springs and renamed it Little Peter’s Melody Club. The establishment was in operation until the mid 1980s. 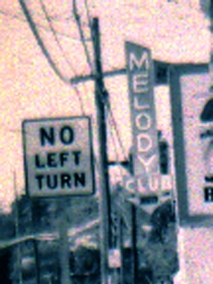 The Melody Club sign was in place until 2014, when it was removed for safety.