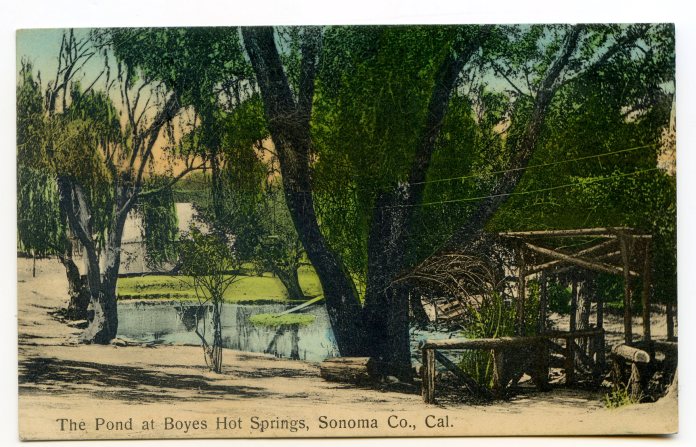 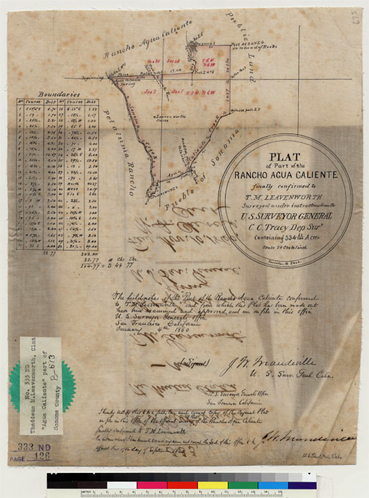 A History of Boyes Hot Springs should begin in April, 1847, with the arrival at San Francisco of Thaddeus M. Leavenworth, a native of Connecticut, purporting to be an Episcopal chaplain. He had enlisted in Stevenson’s Regiment of New York Mexican War Volunteers. After serving as a controversial alcalde in San Francisco from October 1847 to June 5, 1849, where he also took part in school and church affairs, he became interested in farming, or, more specifically, farm land, and speculation in farmlands. The fertile fields available north of San Francisco brought him to Sonoma Valley, where he acquired a 320.23 acre piece of land which would figure prominently in history as the site of Boyes Hot Springs.

Actually, these 320.33 acres covered all the land now known as Agua Caliente, Fetters Hot Springs, and some of Maxwell Farm

In 1853, both Thaddeus Leavenworth and State Senator M.G. Vallejo made application to the Land Claims Commission for title to the 320.33 acres, both referring to the land as a portion of the Agua Caliente Rancho, and both contending before the commission that they were the successors in interest to Lazaro Piña, who purportedly had received title to the property on July 13, 1840, by grant from the Mexican Territorial Governor Juan B. Alvarado. Eventually, in1855, Leavenworth’s claim was approved, Vallejo’s claim having been rejected by the Commission. Apparently Leavenworth had better appearing forged documents than his adversary. From A History of Boyes Hot Springs by Robert Parmalee, 1992, used by permission of the author.

The plat of Leavenworth’s claim was drawn in 1860 by the US Surveyor General in SF. Near the center is a small square with the inscription “Leavenworth’s house.” Also on the plat are the township and range lines of the Public Land Survey System, with their alpha-numeric designations(“T5N R6W”). This system is still in use, allowing the US Geological Survey quadrangle map to be superimposed on Leavenworth’s plat. Ecological historian Arthur Dawson has done just that, writing in the names of the streets as we know them today(Queens, or Queeno street is the un-signed alley that runs along the south side of the Sonoma Mission Inn property.)

Thus we have a pretty good idea of where Leavenworth’s house was: within about 200′ of a point very near the base of the Sonoma Mission Inn water tower.

What did Leavenworth’s house look like? In 1884 TLM sold some of his land to Henry Boyes (and that is another long, interesting story) who incorporated Agua Rica Mineral Springs. They issued a post card showing a house. It might reasonably be assumed that the house, along with the land, was bought by Boyes from TLM, so the post card could be showing us Leavenworth’s house.

Thanks to Arthur Dawson and Robert Parmelee for permission to use their work.